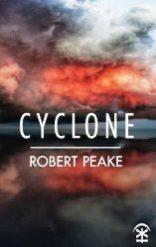 Poetry can push at boundaries and cross them, going where other forms of communication falter and fail, helping us when we need to face difficult and even taboo subjects. For this reason poetry is often called upon when we find ourselves at unavoidable frontiers and need to confront them, notably when we face death and bereavement. In Cyclone, Robert Peake writes about the deepest grief of all, the loss of a child, in poems that stun with stylistic ability while reaching out and touching the reader emotionally.

The collection opens by introducing an irresistible character who gives his name to this and other poems throughout the book: “The Man with the Kindest Face”. I confess I liked this idea so much that I wished I had come up with it myself and I started by reading all seven poems featuring him. The kindness of strangers in times of suffering is a common trope, but Peake’s approach is different as he shows the random small and considerate acts of passers-by and defines them as deeply compassionate.

At times of vulnerability these less than extraordinary kindnesses and polite gestures can feel like demonstrations of human warmth, making these poems both suggestive and perceptive – Peake is skilful at conveying state of mind. The poems featuring this persona reflect the main themes of the collection: not only loss and grief, but also alienation caused by exile, the anonymity of travel, and the need and ability to connect with others.

Some poems, including the ones about the kind-faced man, are addressed to ‘you’, which indicates not only the narrator but also the reader, suggesting shared experience and a sense that this is not limited to the individual but is the human condition. In the first poem of the sequence “Cyclone”, the loss experienced by families around the world is related to personal bereavement, while the recurrent theme of the sea and water is reminiscent of refugees who make dangerous channel crossings:

Two of the four sequences of poems follow a formal pattern, with “Cyclone” composed of tercets and quatrains. The striking opening poem “Waterspout” is followed by different approaches to the theme, all using water in its various states as imagery. In “Steam devil” the poet takes his nephew to the zoo and sees the child ‘alight with the joy of being startled, and safe’ while the opening line ‘I see you in the exhalations of a steam train’ reminds the reader of the lost child evoked in the taste of wind spray in the previous poem. These poems are strong on their own but are also interwoven with repeated themes, imagery and narrative.

The Tasmanian devil at the zoo in “Steam devil” is also depicted as the well-known children’s cartoon character, and this movie imagery forms a connection to the following poem, “Tornado”, which alludes to the abusive treatment of the young Judy Garland in The Wizard of Oz in a deft collage of puns and wordplay:

Specular poems, where the second half repeats the lines of the first half in reverse, are notoriously difficult to write well, but when they work they can be startling, with the repetition drawing a new and strengthened meaning from the conclusion. Peake has a particularly strong and well-crafted specular poem in the “Cyclone” sequence called “Mesocyclone”, which uses similar steam imagery and children’s stories to the surrounding poems. It opens:

The opening line hits home when it is repeated to conclude the poem after these lines in reverse, which is the beauty of the specular form. For me “Mesocyclone” would have worked better in just two seven-line stanzas, with a break between the repeat lines in the middle, rather than adhering to the quatrain form of the sequence. Quatrains place the turn and the two identical central lines at the end of the same short stanza, rather than giving the first mirrored line a more powerful position at the start of a new stanza.

Peake varies the formal patterns used for the four sequences and has some poems within these sequences that defy formal restrictions. The opening “Nomansland Common” series has poems with no stanza breaks, a style I enjoy, while “Mood Diary” includes more experimental styles such as fragmented lines. Although I favour the lack of stanza breaks, there’s a certain enjoyment to be had from diversifying within a collection.

In “The Opposite of Sleepwalking”, the seven poems have fourteen lines each and no stanza breaks. These are not sonnets, unless they could be loosely described as modern sonnets, as they have short lines and no rhyme or metre. This length of poem works well visually, with two per page, and also thematically as fourteen lines are arguably the ideal poetic unit for developing and expressing a single subject concisely.

The sequence describes ‘summer insomnia’, a dream-like state of ‘wakeful catatonia’ with descriptions of landscapes and cityscapes that are suggestive, beautiful and filled with a sense of longing. Especially strong for me are the lines in poem “IV” (there are no titles in this sequence), which starts with a ‘single oboe. The low wail that pervades / each morning’s commute’. The poem ends:

“The Opposite of Sleepwalking” sequence ends with lines filled with loss and yearning:

Cyclone has all the technical skill and emotional strength of a book written by a poet at the height of his abilities so it’s hard to believe that this is only Peake’s second full collection. The poems look both inward at personal mourning and outward towards the universal, from war and the dilemma of refugees to what the future holds for all of us. In the short poem “What Will Survive Us” Peake foretells our own extinction, although ‘The Man with the Kindest Face’ will step in with a penultimate poem to offer his assistance. As Michael Symmons Roberts says on the cover, the effect of the poems is ‘to recover the possibility, however fugitive, of healing.’