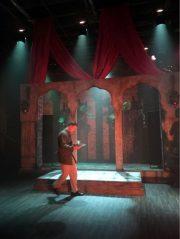 Almost exactly 100 years ago on April 13, in Amritsar, the British Indian Army fired into a crowd of unarmed Punjabis, killing and harming hundreds.

Director Phil Wilmott marks this appalling example of man’s inhumanity to man by transporting Othello from Venice and Cyprus to the India of the British Raj, making the Moor a Sandhurst-trained officer and his lieutenant Cassio a fallible army chaplain prone to women and drink.

In so doing, he creates a realm where the word “honest” that resonates tauntingly throughout the play has only the depth of British hypocrisy.

It’s also a heady atmosphere in which we can well believe manipulated men lose all sense of judgment as unfamiliar forces reign and it’s appropriate that the Union flags draped around a piano look flimsy, while the renditions of Jerusalem and Rule Britannia are sadly out of tune.

So far, so good and for the first half, we charge through the action building to by far the strongest scene in which Iago (Rikki Lawton) transforms Matthew Wade from an upright Othello, the confident general blissfully in love with his wife into a physical wreck as wretchedly jealous as Iago himself.

But once Othello is caught, the momentum dwindles into a second half that drags and the character interpretation, however well-acted, doesn’t convince.  Rather than making the play topical and relevant, politically incorrect assumptions leap to the fore.  The Raj setting confuses our response to Shakespeare’s most emotionally direct play and a tale that confirms the prejudice against mixed marriages makes uncomfortable viewing for a contemporary audience.

Casting Cassio (Jerome Dowling) as a chaplain with a mistress who treats his Bianca (Megan Grech) with mocking contempt strips him of the nobility Othello had seen in him.  Bianca is a dispensable strumpet or whore – a word Desdemona cannot bear to pronounce.

Desdemona (Carlotta De Gregori) combines modern physical strength with girlish wiles.  With a power built up over 14 years of dance training and work as an “advanced combatant”, collaborating with fight directors, De Gregori’s fascinating Desdemona puts up a mighty struggle with Othello.

But she doesn’t win it.  The victor is Lawton’s Iago, maddening, even triumphant, when cornered, in his refusal to say a word as an evil we cannot get the better of.