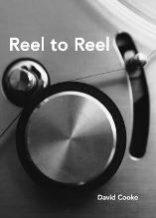 Full disclosure: one of the poems in this collection was first published in More Raw Material: work inspired by Alan Sillitoe, a tribute volume I co-edited a few years ago. I was keen to recruit David Cooke to the anthology because everything I had read of his hewed to the directness, honesty and concision of the best of Sillitoe’s output. Cooke makes a virtue of straight talk and lucidity.

Reel to Reel is arranged into three loose sequences. The first, ‘In Search of Lost Time’, carries a heavy burden with its explicit reference to Proust. Cooke squares up to this touchstone in only the book’s second poem, noting that

before going on to reject the famously prolix novelist’s “madeleine soaking in a cup / of weak tea” in favour of “creamery butter, / eggs with shells streaked in dirt [and] the sizzle / and spit of sausages seasoned in smoke”. This shucking off of hifalutin literary references for the type of hearty and artery-threatening fare you’d more likely associate with a truck stop is characteristic of Cooke’s unpretentious approach to his art.

Which isn’t to say that he’s not cultured, cultivated or assiduously attuned to a rich and rewarding literary tradition. Au contraire. Cooke has benefited from education, travel and an appreciation of the European aesthetic. His gift is the ability to maintain parity between this background and the working class career path that shaped his formative years, a niftily side-stepped dichotomy that some of the poems in the first section presage.

Elsewhere, in ‘A New Shirt’, Cooke evokes the memory of his first socially-guided sartorial statement (“A bright yellow shocker / with a floppy, extravagant collar”), his fashion choices bolstered by the “hint of something else / in Scott Mackenzie’s anthem”, the poem tying together recollection, popular culture and self-examination in a way that he returns to in the final section.

If the conclusion to ‘A New Shirt’ is amusingly self-deprecating, the author’s teenage self ejected from school thanks to his new duds, dreaming “at the back of the bus / of topless Haight-Ashbury girls” as he wends his way back to inevitable parental disapproval, the piece that immediately follows it – ‘Summer of ‘69’ – is as deliberately removed from the Bryan Adams anthem as it’s possible to get:

The final section revisits and expands upon Cooke’s personal history. These poems move beyond childhood and education as the teenage Cooke discovers rock ’n’ roll, and the twenty-something Cooke forms romantic attachments and undertakes his first travels in Europe. The prompt for these memories is nothing so poetically melancholy as Proust’s tea-swamped madeleine; Cooke instead flips play on a “second hand reel-to-reel … / a Philips most likely or maybe a Grundig”. There’s something about this almost throwaway line that I find utterly evocative. Maybe it’s a generational thing: that recollection of taping your then-favourite songs off the radio because you couldn’t afford the singles let alone the albums.

Indeed, simple ownership of an album is recorded (pardon the pun) as something of great significance in ‘Tamla Motown’, one of the collection’s most immediate and likeable offerings:

Didn’t we all buy our first LPs from Woolworths (or am I just showing my age)?

Later, Cooke discovers jazz and the ramshackle expansion of his on-a-budget record collection is bound up in its own unspooling of recollection:

Cooke has enough self-awareness to be ironic about his own life and memories but there’s nothing glib or sardonic about the middle set of poems, a portrait of the hard lives and boozy leisure-times of the trawlermen of Cooke’s adoptive home town of Grimsby. The precision of the social historian and the imaginative sympathy of a novelist of, say, Zola’s stature merge here.

The world Cooke thrusts us into here is one of hard graft that leaves the skin burning with Atlantic cold, the fingers flensed and calloused, the tongue roughened and the senses yearning for beer (“the liquid rises / as if spelling danger, or re-establishing / an equilibrium”) or the affirmation of a woman’s embrace. A world where a galley cook ruminates that he’s a “five-star chef / approved by Heinz”, knowing full well that all his patrons want is “a slice of white to mop up / greasy yolks and gravy”. A world where a woman listening to the soporific litany of the shopping forecast

These short, stark lines are archetypal Cooke: solid, plain-speaking, unambiguous. But look how, well, casually he incorporates “casual”; how impactful it is in terms of what is being communicated. It’s an effect he achieves time and again in these poems, and there’s nothing studied or manipulative about it. It’s simply what he does, his innate poetic ability to stud the everyday, the unpretentious, with telling little details, perfectly nuanced turns of phrase,that cumulatively vouchsafes the collection’s ability to linger in the reader’s mind.