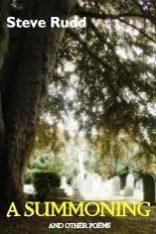 The expressive poems of Steve Rudd speak to the heart echoing loss and bereavement both at a personal level and with a more universal perspective. His spare lines speak directly to the reader with irony and disenchantment, though at times religion seems to be a temporary relief to the burden of human sorrows. From the first page, the poet states his isolation in a mourning setting by quoting from the book of Lamentations, Quomodo sedet sola civitas (how lonely the city stands), and the sonnet from Dante’s Vita Nova, “Piangete, amanti” (weep, you lovers).

The opening poem, ‘A Summoning’, recalls the narrator visiting a chapel and its graveyard:

The journey towards recovery and healing starts here and poetry plays an important part leading the narrator to a deeper understanding and eventually to acceptance.

Blizzards and cold weather reflect a bleak vision that reverberates in the poet’s mind relentlessly. It is an acknowledgment of the emptiness that surrounds us, as there is no answer to human sorrow, only a faint hope that spring may come at the end:

An interesting description of the poet’s job is offered in the poem “A Shepherd’s Tale” where shepherding is at first understated as a humiliating and hard occupation. However, it opens new horizons to the poet:

This brings a new awareness, a novel connection with humanity when an expertise with lambing is revealed as being useful in helping a woman to give birth to her child:

It is a moving salient scene that highlights Rudd’s capacity for encompassing all creatures in his compassionate vision of a symbiosis of human and animals.

Rudd’s open straight opinions address the major current crises such as Brexit, migration, the war in Syria and food banks. He takes a stand against discrimination, exclusion and conflicts, in favour of a more inclusive, compassionate and accepting view:

A poem that stands out is “Old man, river” celebrating the Humber; it testifies the poet’s sense of belonging and love for his land as he remembers the ships that plied the waterway

The distinct picture gives a sense of reality that goes beyond the words and yet it is linked to language, striking the reader’s imagination and revealing sudden evocative imageries. This approach is an effective technique in Rudd’s poetry and is scattered throughout his poems, putting his work in an intimate conversation with the reader.

The last piece of this interesting collection, “A bracelet of bright hair”, is a prose poem that marks the end of the journey in this encounter with a dead loved one. She keeps a ‘braid of hair around her wrist’, his hair, and he has hers around his wrist, ‘after all those years apart.’ This reveals their profound connection that is expressed in ‘evanescent energy … merging and fluxing’ and ‘a combined heat and light’ surrounding them until they become ‘one light of bliss, together’ transcending loss and rediscovering joy.