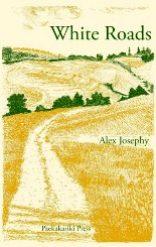 White Roads is a collection of 32 poems, carefully ordered in 5 sections, each fronted with its own epigraph and thumbnail drawing by Silvana Biasutti, whose intricate work also features in full page images throughout the text. The first thing I noticed was the beautiful binding, with an illustrated, textured dust jacket. The book is a pleasure to handle and to look at, and a delight to read.

I think that this is Alex Josephy’s first full collection (a pamphlet is mentioned in the bio). The poems are set in Tuscany, where Josephy lives part of the time, also spending some of her time in London. Tuscany is not an area I know, but it is made vivid in this work: Josephy holds the reader in poems of place, landscape, people and stories. There is little of England in the collection, apart from some comparisons between an English oak and Tuscany’s “Holm Oak” with ‘acorns warlike / in spiked helmets’, smaller than those

London is also remembered in “Meta-Tyrrhenian”, which begins:

Josephy has a knack for zooming in on small things, gazing with an outsider’s eye: objects such as teacups on tablecloths, the ‘violet glow / of the Insect-o-Cutor’; and the abstract made concrete, with rhythm reflecting meaning, in ‘Days / stretched out to weeks, / measured in sacks’ in “I Muratori”. In “Aerial”, I particularly liked the image of this ordinary, often overlooked object as ‘a silver stick insect’.

In the section Segnavie: Waymarks, “Towers of Tuscany” has ‘phantom footings / in brickwork’, evoking women…

A stand-out poem, for me, is “La Bisca Clandestina”, a prose poem, capturing, in half a page, a scene of ‘seven pinafored women’, players in a card game. Their conversations range from ‘Pippa Middleton’s winter hat’, to ‘Wolf tracks in the woods across the valley.’ The poem focuses closely on the seven women, zooms out to the inhabitants of other apartments near to the room where they are playing, then out again into the street, cinematic in its sweep.

I also enjoyed “L’Ospedale”, which perfectly captures the slow pace of country life. A doctor takes his coffee, leaving his ‘black bag’s grimace’ open on ‘a marble table’, while ‘Your bleeding finger seeps, darkens / a dishcloth.’ There is no hurry, no anxiety: ‘You have the scarlet geraniums […] What more could you want?’ I love the contrast of the slow drinking of coffee with an ambulance crew: the emergency team, but no one is rushing.

My favourite section is Favole: Stories. “Scheleteri” tells of skeletons found beneath a chapel floor during a ‘now abandoned’ renovation. Here is a striking image of the chapel with ‘roof beams left to warp / banners to bleach / nailed door’, reflecting the uncovered bones, whose fate we remain unsure of. Were they ‘lowered […] back to the hollow place’, or ‘carried to the ossuary’? Buildings hold stories in their walls and roofs, like in “Santa Maria della Scala”, its ‘white walls sketched / with arches. Traces of bed-heads’ for ‘orphans left / at the side gate.’

The collection ends with poems on plants, including a love poem: “Radichio Trevigiano, I Love You”, which is a prime example of what Robert Vas Dias, on the inner back cover, describes as the poet’s attention to ‘minute particulars’.

My copy of White Roads is marked 179/250. I highly recommend that you seek out this book before all 250 copies are gone.