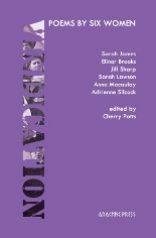 Vindication is a compelling collection of poems written by six women questioning their identity as daughters, mothers, lovers and individuals. Their personalities are trapped in prefabricated roles, or split and blurred in images that mirror unconvincing stereotypical figures of temptress or muse, at the margin of the main picture where man is at the centre. In these poems they vindicate their right to be people at the core of their own lives.

In Sarah James’s poems, models distort and shape women, who are helpless, at the mercy of man’s desire:

Her identity is bound in ‘stitches she calls fate – /though really she means mistake’ (“Only Child”). This is a tragic destiny that moulds her without escape. There seems to be no solution to this condition except acknowledging it and ‘breaking its strings’ (“The First Step Afterwards is Simple”) and then trying to find a new voice inside herself. Her awakening leaves a void, the awareness that ‘God’s index’ points ‘straight to man’. Eve is on the side-lines, ‘out of sight…snake hissing on her head’(“Waking Woman”). There are clear allusions to the famous painting by Michelangelo, “The Creation of Adam”, on the ceiling of the Sistine Chapel and to an ambiguous Eve-Medusa figure:

It is a peripheral subjugated position that marks her with sin and guilt, and leaves her isolated in a godless world.

A new vision seems to be envisaged in “Chimera and Her Son” where the description of the child delivery makes the woman central:

She is heroic in the childbirth, natural and supernatural at the same time, finally powerful and in control.

***
A rare and fascinating use of sounds characterises Elinor Brook’s poetry. “Men An Tol” (stone with a hole) evokes the late Neolithic stone circle in Cornwall by the same name. The holed stone is a magic door where a mother brings her sick child to be healed. Alliterations and rhymes create the atmosphere and set the scene in a timeless past where the bond between mother and daughter is communicated in the mother’s worries and in the daughter’s life energy:

A similar captivating prosody is found in “Consulto Et Audacter” (Purposefully And Boldly, motto of St Anne’s College, Oxford) dedicated to Emily Davison. She was a famous suffragette who studied English literature at Oxford, a passionate militant whose actions were often violent. She died stepping into the path of one of king George’s horses at the 1913 Derby. Her actions are subtly recalled in the poem:

Her heroism (or terrorism, who knows?) was triggered by anger and frustration which brought her to extreme reactions. The poem celebrates her bravery in a lucid and earnest tone showing honest recognition.

Jill Sharp wittingly plays with lines, structures and relationships, revealing her sharp irony, apparently light-hearted but always hitting the target. She recreates the father she does not remember ‘from a photograph/of Harold Macmillan and an old raincoat’ (“Dada”) from a charity shop. A more up-to-date vision comes to her mind at the end of the poem, her dad ‘sits staring at his mobile phone, vapes / secretly in the downstairs toilet and / picks his nose when he’s stuck in traffic’.

The ludic quality of her style is testified in the blank page of “The Emperor’s New Ode” where the lack of the written poem is replaced only by the footnotes that explain that ‘the only emperor is the emperor of ice cream: Wallace Stevens’. The sarcasm expressed in this absence underlines the futility and arrogance of men’s stories where woman’s ‘ontological significance has been underestimated’.

Her poems reflect on other poems, on structure and significance, or lack of significance, in a world that does not leave enough space to women, or maybe only the space of absence. The most significant piece in this sense is “Vlad the Impala”; its clarity is ironic, effective and cogent:

The abusive relationship freezes the woman in an unredeemed position she cannot avoid. It seems a destiny she cannot escape but only endure.

The symbolic quality of Sarah Lawson’s poetry is such that it rewrites stories and myths looking for a new perspective. Her imagery is fresh, thought-provoking, revealing concerns about a language that shapes views and identities. The poem “Leda” is an example. Its imagery highlights the boastful attitude of Zeus-swan who brags of his strength and power in order to conquer Leda. Her defiance and determination provide an alternative conclusion:

The metamorphosis is reshaped, the story takes a different path; the swan-lover is erotically hand-cuffed and finally Leda has an active role. In this revelation she protects herself and vindicates her rights.

The poem “Vindication” by Ann Macaulay is a found poem inspired by the work of Mary Wollstonecraft. It states the main theme of the anthology and is a manifesto that echoes Wollstonecraft’s thought in clear riveting lines:

The ending calls for a change:

The poem tells the actions to take rather than showing them in subtle imagery – as is done in other poems of this anthology – but it seems necessary at this point to set the issues that need to be addresses if women wish to change their condition.

A similar telling rather than showing is in “A Man Once Said to Me” where the pressing repetition of the title phrase lists the most common verbal abuses women undergo, a sort of casual racism that reinforces stereotypes:

A different approach has the prose poem “Here Lived” commemorating the Stolpersteine – meaning ‘stumbling stones’ –, a project started by the artist Gunter Demnig in memory of the victims of the Nazis’ persecution. The stones are set into the pavement in the place where the person lived or worked. They are covered by a brass plate engraved with the name and story of the victim. The passer-by can casually ‘stumble’ into it, metaphorically speaking, and remember what happened. It is a memorial that is not confined to a special sacred site but is dispersed everywhere the crime occurred against ‘Jews, Roma, Sinti, Jehovah’s Witnesses, homosexuals, disabled, dissidents’, whoever the Nazi regime considered a ‘potential issue’. The names of the ‘unwanted, the eliminated’ is polished, rubbed to shine ‘until they see their reflections … one stone, one name, one person’. The tone of the poem is strikingly sensible but at once conveys deep emotions. Its imagery focuses on the names and the stories, the importance of keeping their memory by making the plate gleam, reflecting our own stories in it.

The final poems by Adrienne Silcock restate the constructed quality of woman’s role in renewed metaphors and symbols:

In spite of the fabricated narratives, the enforced marginalisation and diminishment, in spite of the anger and frustration, the hope for a better future seems to be the last word:

The legacy to the forgotten stories of women of the past who endured the same sufferings is connected once again to the persecution of the unwanted in “Tying Laces”. The poem’s narrator practised hard to learn how to tie her shoe laces at the age of five and this simple action is ‘unfathomably entangled’ with the victims of the Hungarian Arrow Cross Militia who forced the people they executed to take off their shoes because ‘shoes, it seems,/were more valuable than life,’ (“Tying Laces”).

The poems collected in the anthology form an absorbing analysis condensing some major issues in the vindication of women’s rights since Mary Wollstonecraft. They are a tribute commemorating women’s past sufferings and perseverance, and they point to present commitment to an ongoing fight.