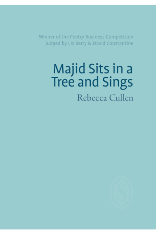 An intriguing title and a writer I don’t know, Rebecca Cullen won the Poetry Business pamphlet competition with this one. The opening and title poem deals subtly with the visceral realities of living in a terrorist state (‘the meat hanging on the goal posts’). Any poem that has me googling the meaning and significance of a name has my attention. It is at once mysterious and terrible, and promises much for the rest of the nineteen poems.

The subject matter quickly turns to the domestic and ordinary in the next few poems, however. That is a pity as I was expecting more toughness and more on this topic after such an opening, not that these subjects are without their interest, and in poems like “Mother” interestingly handled in long lines, statements of fact and careful repetition.

Cullen does write the bitter truth rather well in poems like “Pillar Box Dress”, where after a relationship break up the poem says:

‘When I found my father in my thirties’ is an uncompromising poem of measured defiance; the better one of two dealing with her father:

Inevitably in the space allowed in a pamphlet one only has a snapshot; an impression of a poet’s range. Here there are several real/unreal/surreal poems that I especially enjoyed. “The Gradual Loosening of Decorum”, for example, narrates the tale of a clock hand crashing through a bank manager’s window:

“Sunday call from Africa” is a charming long distance affair:

I liked poems in which Cullen takes on a persona: “Southbank” is one such prose poem, and the fate of the giant in “Crossing from Marazion” is a fascinating tale, that sounds as if it might be true, but matters not either way. The same can be said for “Walking with Richard in Nottingham”with its knotty simile: ‘your punctuality as artful as your cable knit’.

Less exciting to me, though, are poems about Hughes and Plath, and writing retreats; most of all the poem that contains all of the above. I would have excised it. And I would watch out for poems (there are two) where the last line begins ‘In the morning’. It looks like a tick to be avoided. But these are minor nits in an otherwise entertaining read that balances the serious with the amusing, and contemporary concerns with the historic rather deftly. Well worth five of your British pounds.