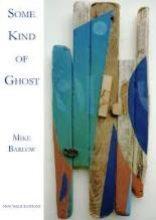 At first glance, Some Kind of Ghost is just that: a series of ghost stories about dying relationships, and missing people. In particular it features dead fathers, both biological and their imagined replacements, for example in the excellently titled, “I explain to my long dead father how poetry is less authentic than dreaming” or “The man who was not my father”.

However, while this collection is indeed filled with ghosts, it’s largely a collection of displacement and separation. In the second poem, we see a quite literal act of separation come into play in “The Stump Cross System” where the poem has us spelunking deep underground, ‘Down in the lower levels, / way beneath the show cave…’ These are the first two lines of the poem and the first line rather marvelously mimics the act of descent with its use of a dactyl and two trochees, like going down steps.

And, in what I hope is a deliberate act of symmetry, this sleight of hand and use of hands is echoed in the final poem, “Plums” where we’re told

It’s this ‘Believe me…’ that’s crucial. It feels innocuous at first, but later in the poem as we reach the conclusion, we’re told that a relative of the central character knows them to be in the business of making things up.

This poem also completes the circle by bringing us back to the first person, after a long section where the acts of separation and displacement are amplified by a switch to the third person, following early poems that are written largely in the first. And it’s this switch that allows us to look at the world from the other side of the mirror.

In the first section, the mirror is largely being held up to the narrator’s face. In this second half, it’s held up to the world, for example in “The House on the Border”, the penultimate poem, with its evocation of a place long abandoned by many types of folks all living on the periphery of society: ‘farmers, rustler, smugglers, squatters’. The poem also asks those of us in the present to

We see more examples of the borderless and the separated, particularly in “The Leper’s Door”,

It’s the messages from family that feel most poignant here, although it’s also worth noting the bonus ghost in the form of the sacrament on their tongues.

Mike Barlow and New Walk Editions have crafted a pamphlet containing poems that absolutely ‘have a deceptive ease and informality’ about them as the back-cover blurb tells us. It’s this ‘deceptive’ in the blurb that rings the truest to my mind. I’m more than happy to have followed the flight of Barlow’s hands while he conjures magic in front of my very eyes. It’s not the ghosts we need to be afraid of here, it’s the living.