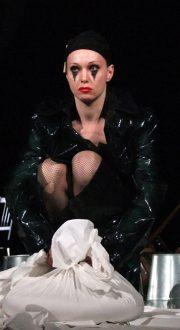 It is rare to see productions of Brecht in London today.  It is even rarer to see them performed in Russian.  This jewel  from Moscow came only briefly to London but it showed audiences that there is an antidote to endless naturalism.  Here is an international style that is brazen and brilliant.  It is loud and it is risky.

Brecht’s parable on whether a person can be ‘good’ in a corrupt society offers huge scope to directors and here Yury Butusov seizes the text and roughs it up as an extraordinary spectacle that engages on every level.  There is music and dance, there is Expressionism and there is carnival.  There is Brecht’s Verfremdungseffekt which makes the audience think as well as feel.  It is a total theatre experience that is constantly surprising.

Brecht’s anti-parable is set in an imaginary China.  We know that in 1935 he saw performances of Chinese Opera in Moscow and that this influenced his own thoughts  on epic theatre and contributed to  the creation of his theory on the Verfremdungseffekt.  Butusov’s production also has an operatic element.  He uses Paul Dessau’s score but there are additions of  jazzy compositions by Igor Gorsky’s band Pure Music.

Adding to the alienation effect, I liked that the text was in Russian but the songs were sung in German.  It gave an edge to the vocal soundscape and reminded us that Brecht wrote the play in exile beween 1938 and 1942.  Uncredited in the programme are Brecht’s co-writers  actor, writer, translator Margarete Steffin and writer, director, photographer Ruth Berlau.

The story is simple but the text is a complex interrogation of morality.   Its protagonist is Shen Teh, the prostitute visited by the gods in search of one good person.  Jewish tradition requires 36 wise men to save the world.  Brecht’s gods are less ambitious.

The acting company are magnificent.  It is unfair to pick out individuals in a stunning ensemble  but, as the production centres on Shen Te the prostitute and her alter ego, her male cousin Shui Ta, it has to be acknowledged that Alexandra Ursulyak’s huge  dual performance is magnificent.  There are moments of Chaplinesque humour and poetic beauty.  The  extraordinary set by Alexander Lisyansky is plastic and inventive.  Although the production was Brechtian in its soul it also had a post modern feel as all staging suddenly broke down when actors sat onstage to face the audience while speaking the text.

The play has no happy end.  It resolves no Christian dilemma about Good and Evil.  It remains complex and disturbing as Shen Te utters a solitary cry to the audience ‘Help!’

My only regret is that this production had such a short run.  We need to see much more of this Company and this ensemble.