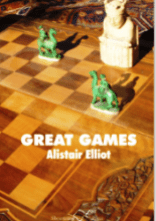 Stephen Claughton admires the tenth and final collection from Alistair Elliot, a poet who remained productive and inventive throughout his career

This is Alistair Elliot’s tenth book of poems and the last to be published before his death in November at the age of 86. He belonged to a generation of Oxford poets that included Adrian Mitchell, Anthony Thwaite, George MacBeth, Geoffrey Hill and Alan Brownjohn, and was a translator of poetry as well as a poet himself — from French, German and Italian in addition to Latin and Greek, which he studied at university. An erudite man — the former Head of Special Collections at the University of Newcastle and (on the theme of games) a regular winner of the “Author, Author” quotation competition in the TLS — he wore his learning lightly in the poetry, which characteristically combines formal structures with an engagingly informal tone, although he wrote in free verse as well.

Great Games comes hard on the heels of Telling the Stones (2017) and may represent a tying up of loose ends. There are five, very different sections, connected — as the title suggests — by Elliot’s typical playfulness, though that doesn’t mean that the subjects themselves can’t be serious. The first section is about the War in Afghanistan, “The Great Game” of its title being the 19th century confrontation between Britain and Russia, familiar to readers of Kim. At the core of its two parts are 76 individually-numbered, cross-rhymed quatrains that present a series of vignettes rather than a single narrative, taking us from the destruction of the Twin Towers to the reestablishment of a government in Afghanistan. The structure enables the poet to range widely within a short space and captures both the fragmented way in which we “experience” such events through news reports and the fluid nature of Afghan alliances, as much a problem for the foreign “tourists” who joined the Taliban as for ISAF:

The humour is inescapably black, forming a wry commentary on the absurdities of war, presented from a variety of perspectives. Any actual jokes are (perhaps deliberately) unfunny. Some of the rhymes (and prosody) are a bit of a stretch (‘dropped a’ with ‘helicopter’ or ‘Trenton’ with ‘rent one’), but it’s all part of the satirical effect. More of a problem is that in tightly condensing the material, not only the structure, but the writing itself becomes fractured, clipped sometimes to the point of telegraphese, as the above example illustrates. The rules of “The Great Game” were set out at the beginning: ‘The home team always wins’; and the poem culminates with a celebratory game of Bozkashi — traditional polo, played with a goat.

The next section, “Stories”, contains nine short prose pieces, which are stories in the sense of tall stories. Several depend on word-play: offered a cup of tea with the words, ‘Perhaps you’d like to put in your own milk,’ a new mother takes the expression, as it were, literally and duly obliges; going to a festival of Homeric hymns, a pair of ancient Greeks decide on a game of cliché-spotting ‘Homeric Bingo’ at the Odeon. There is also an account, like an etiological myth, of how The Odyssey got its non-linear structure: the result of some last-minute re-ordering, when key reciters were delayed on their way to a performance. Homer, who organises it, is an administrator, not a poet. Although amusing, the stories are slight — in the nature of jeux d’esprit.

They are followed by two sections, “Arthur Longbow” and “The Sonnets of Lady X”, in which Elliot adopts the personae of two supposed, late-Victorian poets. Arthur Longbow, a fictitious note tells us, was forgotten as a poet until one day his grandson told him they had been reading a poem in the school anthology by someone with the same name, ‘a strange coincidence’. That said, not many of the poems here seem likely to have been deemed suitable for schools. “The Muse and I”, for instance, ends:

and the section finishes with a poem “On Ernest Dowson’s ‘Poésie Schublade’”, the poems about his love affairs that Ernest (not Edward as the note says) apparently kept in a drawer.

Even more likely to have needed keeping under lock and key are “The Sonnets of Lady X” — not, another cod note informs us, Lady Augusta Gregory, who wrote a series of love sonnets to Wilfred Scawen Blunt, but possibly the person Blunt turned to after leaving her. Splendidly erotic, the 18 sonnets are more successful than the Longbow poems in creating a character, one who trips lightly over the iambic lines, her innocence a prey to their shared lust (‘I thought: In heaven people wear no clothes. / Your fingers touched the buttons down my front’ or ‘you bare the places / Only my little boy has seen and touched / And toyed with as he drank’). And there are the practical problems of affairs conducted in Victorian drawing-rooms: the clothing with its ‘Gowns, corsets, petticoats and drawers’ (‘The settee wasn’t easy: the silk dress / Under my crupper slid about too much’); or the presence of domestic staff (‘The servants know, of course. I couldn’t do / Even what you suggest for when I’m bored / Without their knowing.’) Indecorous to say the least, the poems may be too awash with bodily fluids for some.

The miscellaneous, final section, containing what Elliot clearly knew were to be his “Last New Poems”, continues in the same vein as Telling the Stones and shows that he had lost none of his customary wit. Elliot’s subjects are always interesting and often surprising. Among the 15 poems here, we have, for example, Semiramis possibly having sex with a horse (‘If it became too much, could she say Whoa?’ being one of the lines thrown up by the villanelle’s rhyme scheme), penis envy among bonobos and talking to Omar Khayyam about dark matter. There is also a sonnet, “Making”, about — well, composing a sonnet. Poems about writing poems are nothing new, but there is something beguiling about Elliot’s characterisation of a poem as a place to inhabit:

Telling the Stones ended with “Deposition”, in which the poet asked that his ashes be poured into the tide-flushed latrines of Dunstanburgh Castle in Northumberland. Great Games concludes with “Another Deposition”, which this time is to be at his birthplace in Liverpool. Beginning with a memory of scattering his father’s ashes in Glencoul, where he had been born, it ends by imagining the current occupant of his parents’ old house using a hairdryer to disperse his own ashes, emptied from a plastic urn:

Elliot’s My Country: Collected Poems was published in 1989. There have been six books of poetry since then and it is to be hoped that a complete collected will now be put together. Accompanied by a volume of his translations, it would be a fitting tribute to this highly intelligent and technically accomplished writer, who remained productive and inventive even into old age and whose passing is a sad loss to the world of poetry.