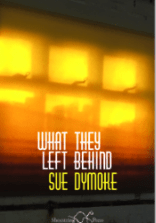 This is Sue Dymoke’s third poetry collection. She lives in Nottingham and lectures at the University of Leicester, specialising in teaching, researching and writing about the teaching of poetry. She begins this collection with a series of poems looking backwards: evocations of times past and people and objects lost. The language is easy but sparkles with words and word combinations which jump out, like

in “Small rebus”. As a reader I don’t feel locked out of the poems, always included and invited in – that’s something I value in poetry. There’s accurate observation here, and careful crafting of the poems too, but Sue Dymoke doesn’t wave a flag saying she’s clever, although she obviously is. She delivers a gentle nudge, calling pinnies ‘household armour’ – a telling description that stays with me.

The poems move into the present with “I know this city”. I had ‘we built this city on rock and roll’ in my mind as I read it, and that wasn’t too inappropriate! The poem is about Dymoke’s home city, and each stanza begins with ‘I know’. The repetition reflects the poet’s familiarity with the places and people, the sights and sounds of home, but there are also perceptive comments about Nottingham people and their relationship to strangers.

There are poems about moments, about experiences, triggered by paintings or places visited. There’s a bus queue in “Going nowhere”, the accidental cropping of a tree in “Whitebeam”, a visit to an arboretum in “Arboretum shapes”.

There’s also wry humour, warm and perceptive. The found list poem, “At Rose’s Party”, goes through the hierarchy of guests, from ‘His Majesty’, through generals and duchesses to plain

“Does this poem pay its way” addresses the politics of public funding for the arts, based on economic rather than artistic value. Does this poem ‘give you value for money’, it asks, and there’s a wonderful list of all the ways the poem might encourage you to spend, including the purchase of a waste paper bin. No waste paper bin for these poems.

There are also powerful poems here, poems of emotions and pain. “Launde Abbey Loss” touched my own experience of wanting to

After a blank page, the last section leads us into darker territory, and the experience of cancer. The first two poems in this section tease out the mysteries of DNA. The first, untitled, leads from the word ‘mistake’ to ‘mutate’, visually expressing the random changes that lead from one to the other in the body. After another blank page (I’m not sure why) the poem “Spelling it out” takes that puzzle further, using the initials of the elements of DNA, and asking when the mistake happened, how such an apparently minor aberration can cause such havoc. The apparent lightness in the language masks the enormity of the experience, and the following poems explore the relationship with hospitals and doctors, family and friends during the process of treatment. Here I felt the power of the poet, and the anger of “Furious answers” dares to address the rage she feels:

Beginning quietly, “Medical humanities” packs the punch of the last line with its insistence on being treated as a human being. “Rounds” tells the detail of the experience, capturing every sensation until

The poems at end of the book come back to nature, to friendship and walking, the small things which make life meaningful in the middle of what is uncontrolled and uncontrollable.

This is a fine collection, wide-ranging and skilfully crafted.