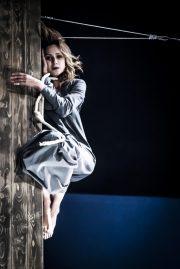 The set is stark: transecting it are two oppressively massive beams of wood, one vertical. one horizontal which extend blindly into the space without ever truly defining it – a roof and wall which fail to offer the conventional associations of protection and permanence.

There is no permanence here, nothing is certain, everything is in flux.  The Moscow Pushkin Drama Theatre production opens to the stuttering, hesitant sounds of a violin.  Before a word is spoken, we are plunged into a world of apprehension, of uncertainty.  The Cherry Orchard lays bare, in elegiac tones, the passing of the old, entrenched aristocratic order and the emergence of the new at the expense of the old.

Vladimir Mirozoev’s production is anything but conventional; anyone hoping to see a gorgeous backdrop of cherry trees and lavish period costumes will be bitterly disappointed.  But these are superficial considerations.  The mark of a successful production is a real understanding of the major themes of the play and the art of conveying these through the characters, and in this Mr. Mirozoev is a master.  His approach is daring – it is a risky business synthesising so many strands of varying theatrical styles into dramatic coherence.  Mirozoev’s Cherry Orchard makes use of realism, choreographed movement, free form dance and something close to grand guignol overlaid with a Brechtian sensibility all set against a backdrop of plaintive Jewish and Spanish music to create a vision of a society in decline and another in the ascendancy.  The nostalgia of the old order and the brash ideology of the new order are admirably served.

There is a perennial difficulty with Chekhov’s works: it is well known that Chekhov himself described his plays as comedies.  As the author, one would imagine that he knows what he’s talking about.  However, even as great a talent as Stanislavski begged to differ and staged The Cherry Orchard as a tragedy, thus incurring the great author’s displeasure.  Ever since that first production, academics, theatrical directors and actors alike have tussled with this apparent contradiction.

Mirozoev refuses to favour either side of the debate which, last night, resulted in more laughs than I have ever heard from an audience at a Chekhov play, while sacrificing none of its  tragic elements. Is The Cherry Orchard really a comedy?  I’m still not convinced, but this production reminds us all that humans can find humour in dark moments, that they can be idealistic, they can be absurd, and that sometimes that absurdity in itself is tragic.  Perhaps it is no coincidence that it takes a singularly profound emotional Russian sensibility to reconcile these apparent contradictions in Chekhov and reveal them for us dramatically on the stage.

The actors play together as harmoniously as a symphony orchestra – this is ensemble acting par excellence. Alexander Petrov as Lopakhin and Anastasia Mitrazhik as Dunyasha with their dynamism and social pretensions respectively, perfectly convey the ineluctable rise of the peasant/working classes; Alexander Dimitriev as the idealistic, fiercely ideological eternal student Trofimov points the way towards the inevitable future.  Meanwhile. Victoria lsakova as Ranevskaya. floating beautifully and aimlessly around the stage, dispensing money that she doesn’t have, fluttering her hands in futile gestures, covering her ears and eyes in a refusal to hear or see the obvious, wonderfully illustrates a woman who has outlived her time, and either cannot or will not confront the reality that is about to overtake her.  Finally. Konstantin Pomelov as Simeonov Pishchik gives a beautifully judged performance as a man who seems to be on the brink of destruction, but whose optimism is favoured by blind chance and finds riches through the advent of the new in the shape of English investors.

This is a challenging production, and let’s face it, it’s not always easy reading surtitles while watching the action. but this is a production that well repays the effort.  I found myself wondering whether an English company could have conveyed so much within so minimalist a concept.  I didn’t manage to come up with an answer.  But it is undeniable that this company of talented actors and their equally talented director have given us, in this less than conventional reading of Chekhov’s play, a quintessentially Russian insight into a quintessential Russian masterpiece.