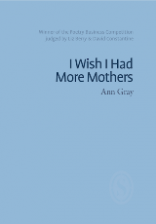 I first became familiar with Ann Gray’s poetry with the 2008 publication of her collection, At the Gate, which dealt so tragically and so beautifully with the death of her partner. It was immediately clear that Gray is a poet who knows how to express grief without becoming maudlin.

I was reminded of this at the T S Eliot prizewinning readings at the Royal Festival Hall this January, when someone remarked to me, not entirely positively, on the number of poems appearing at present that deal with the death of a parent, especially the death of a mother. Yes, death of someone we love is one of the seminal events of our life, opening, through that wound, real insight into who we are. But there are many other experiences, an infinite number of experiences, of joy and beauty; and poets can — and do — celebrate those as well.

This is what Ann Gray does in her chapbook, I Wish I Had More Mothers. Starting out from the inescapable reality of her mother’s descent into dementia, she writes about her relationship with her mother, bringing out the light and shade of family relationships. Not only does she describe her mother’s physical state in alarmingly graphic detail, ‘She poses there, threadbare, / her back collapsed, neck craning forward’, Gray also looks the tragedy of dementia full in the face, without abandoning her deliciously subtle humour: ‘She’s losing nouns and I have / to rummage in my brain to help her find them’.

The positive joy in Gray’s poetry frequently lights up her inevitable and understandable grief. Indeed, the first poem in the collection, the poem that was commended in the 2010 National Poetry Competition, is called “Joy”.

And there is joy in this collection, for ‘everyone deserves joy somewhere’. There is also compassion and honesty; and Gray can often make us catch our breath as she reveals an unexpected truth or a detail of the world that we normally take for granted. This is, perhaps, most clearly illustrated in the final poem of this collection, “Will this be the year”, in which she notes a whole series of small, exact details of life, ending with the poignant hope, ‘Will you lose no one you love?’

Appropriately, the first half of I Wish I Had More Mothers is entirely made up of poems about the poet’s mother; then in the second half the net is spread a little more widely, while still keeping the reality of Gray’s relationship with her mother in focus. Referring to a different relationship, she urges, ‘Let’s hope to age together, / but if we can’t, let’s promise now / to remember how we shone / when we were at our best, / when we were most ourselves’.

Various poetic forms maintain variety, with sonnets, a villanelle, a ghazal and a pleasing flow of free verse. I was particularly pleased that in her ghazal, Gray observed the rule that so many writers ignore, of including her own name at the end: ‘Mutti, I hear you say, and who are you? / It’s Ann, I’m here. I’m standing next to you’.

In the title poem, Gray fantasises about what might have been, while enunciating the width of life experience that is part of motherhood. The poem ends with the wish that she had a mother ‘who’s mind was still sharp and tender, who could / listen, who still had enough of a whistle to call up a dog’. The next poem, “When my mother is dead” also celebrates what her mother has meant, and still means to her. If I have any doubts about Gray’s representation of her mother in this collection, it would relate to her ruthlessly honest depiction of her mother, who is a real, and still living, person, even though understanding the poetry itself is past her. But I’m sure Gray can judge for herself whether that is acceptable and, as she herself recognises in “Joy”, ‘A mother is a precious thing’.

This publication won the Poetry Business Competition last year. It is here presented as a short, neat chapbook by smith|doorstep, though I always find it surprising when publishers (particularly, it seems, pamphlet publishers) include the initial pages of the work in their page count, so that, for instance, in this publication the poetry begins on page 5 rather than page 1.

As we face a future in which increased life expectancy brings the unwelcome corollary of more instances of dementia, this small book is timely — and important.