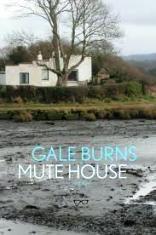 Gale Burns is the master of the resonant phrase. Mute House, his first full-length collection, is absolutely chock-a-block with them: “Here,/regal horses swish their tails and nod, while noisy rooks/picket the dead elms” (‘England’, the first poem in the book); “cuttlefish bones,/carried inland to build up budgerigars” (‘Exceat Caravan Park’); “To be with another is a fine-spun thing” (‘Laying Turf Around the Pond’).

These perfect moments – poised, delicate, robust, surging – are not just rural epiphanies (though the first section focusing on home, ‘Near’, explores the intersection of town and country exhaustively) but are urban as well, and no less memorable for the shift in focus:

They even fuse the two, adding a subtle philosophical undercurrent, as in the short work (here given whole) which provides the book’s title:

In the first third of the collection, staying close to various English homes (with occasional exotic excursions), we are treated to a rigorous poem-by-poem examination of what can be experienced in familiarity. The intersection of human and animal life; the cultural shifts that emerge as the city gives way to the suburbs; the odd, surprising ways in which mind and environment both clash and blend. The last poem in the section is typical of this theme, and also quite extraordinary. ‘The Builder’ starts out normally enough (“Small, ageing, gimlet eyes, no English;/I serve him tea, four sugars”) but rapidly descends into a dystopian nightmare, ‘Metamorphosis’ by way of Alien:

This is perhaps the perfect Brexit poem: intertwining cultures, mutually dependent (at least economically), but wordless in the day to day, crumbling under pressure until functions, identities, even lives blur, everything that is unpleasant boils to the surface and we can’t make heads or tails of anything:

It is tempting to regard these three rooms as the three sections of the book (‘Near’, ‘Far’ and ‘Knowing’) but in reality, the image better captures our current directionless frenzy: attempting to stop the bleeding while chopping our legs out from underneath us.

Oddly like Brexit, too (though not intentionally), the first broadly pastoral section, focusing in depth on the vagaries and pleasures of home, is the most consistent, and in consequence the strongest. Even where describing obviously ‘external’ experiences (‘The Kibbutz’), the poet’s profound focus on interiority and its outside markers illuminates how both states shift in relation to the other. Waiting for the inevitable rocket, we feel along with the children that “we earned these hours/by grabbing bulbous avocadoes … or worst of all,/stepping through housed chickens, extracting/the flattened dead.”

In contrast, the second and third portions of the book are more mobile – taking in Paris, Sweden, Spain, Budapest, Russian defectors – but also less relentless and concentrated in their effects. The third – the movement from near to far, and onwards, perhaps intending to suggest an ultimate destination of knowledge – is a little abstract, even experimental. A long prose poem sequence, ‘Towards a Compendium of Human Conditions’, is typical: embracing such maladies as death and happiness, it is clever and spirited yet still feels slightly detached, in a way ‘Love’ does not (though this poem comes only a few pages before). Though it opens with a visceral list poem, ‘The Taste of Horse’, the final section has the feel of a falling-away rather than a crescendo; ‘Horse’ has the power to set up an echo of every brilliant line we have seen earlier, but somehow runs out of steam:

It’s not that sections two and three of Mute House are not well-written (they are), or that the poems individually fail to deliver (at least every other poem has yet another killer line or phrase), but simply that the book concentrates such quality into its first third it is a very hard act to follow. It raises one last interesting question – with such punch line-to-line, and poem-to-poem, is a conceptual scheme laying out the work for our attention even necessary?

Perhaps instead we should rest in the wonderful, questing and open conclusion of ‘Hitchhiking’, and seek to go no further: