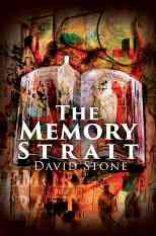 We seem to be in a bar, perhaps at the Chicago Biograph. There are ‘drum peals’, references to Kierkegaard, the mathematician Euler, knights and fables. Perhaps the poem is a representation of the sounds of a drum solo, or of the mental spaces one might enter while considering philosophy or mathematics: ‘splintered/collapsed ledges… calculations/of overwhelming force.’ The poem teeters on the brink of representation, then kicks off in staccato bursts into the surreal.

David Stone’s The Memory Strait is demanding reading. I first read through the collection as if listening to jazz, or to mid-career Bon Dylan perhaps, without trying to ‘make sense’ of anything too closely, then returned to unearth dominant images and patterns.

The collection is ‘In Memoriam’. It is dedicated to Marilyn Stone (Stone’s wife, I assume), ‘a photographer, artist, mother and teacher’, and to Giuido Vermeulen, also an artist. Most of the poems are written in the past tense, and/or in sentence fragments. Stone’s idiosyncratic diction and surreal use of unexpected juxtapositions conveys a restless, intelligent energy. I imagine the ‘straits’ of memory as narrow channels, through which the poet pursues what’s lost or broken or gone. These are often desperate straits, but there are also many moments of irony and absurdity.

Stone’s field of reference is wide-reaching, while the poems play out in a cool, cultured American urban setting. Mainly, I think, this is Chicago. There are theatres, cinemas, casinos, bohemian clubs and their habtués: the wonderully-named Dill Pickle Club, ‘the Florist’ who wears ‘an ivory carnation’. Triads and racketeers rub shoulders with philosophers, Teilhard de Chardin, Kafka, the outlaw John Dillinger and others. The dominant tone is nervous, amused, uneasy. Memories of WW2 and Nazism lurk in the shadows; in “The Day of the Dead”, the narrator’s father’s war memorabilia are itemised in a matter-of-fact way:

The poem then moves into a tortured dreamscape:

As can be seen above in “Drum Peals”, shape and layout are used throughout to enhance the sense of fracture and to suggest syncopation. In some parts of the collection, words run down the page in very narrow columns (straits?). In “Endpoints”, Stone refers to Guido Vermeulen’s collages, characteristically creating a collage of words, images and suggestive disjunctures:

There is an amusing moment in a later poem when Marilyn (M) cuts across Stone’s jazzy flights of language, to suggest a more grounded perspective:

Grief gathers in quieter pools in the central, elegaic poem sequences; Stone’s moments of steady realism are all the more potent for being relatively rare, like “The Birthday Party” held for a young man with autism, illuminated by ‘a brilliant field of night lights’. I was particularly struck by two sequences dealing directly with memory: “The Strait” and “Avenues”. In these streams of recollection, the poet moves with a critical eye through an underworld of cinemas, films, restaurants and other locations, all precious because shared with ‘M’.

The book continues into a second section, “The Phemomenology of Night”, a bricolage of remembered and contemporary angst (‘the nightmare/playscript of the 1950s… A scream from a balcony. /A motel stop./ Planetary surveillance’). These perceptions are once more lifted by small, treasured discoveries:

The bohemian underside of Chicago was not resonant to me before reading this vibrant and challenging collection. But I struggled, and was finally won over. As in collage, Stone shreds and reassembles aspects of personal memory, cultural icons and known narratives; the reward is that with some effort on the part of the reader, the poems do eventually spring vitally alive.

Your Culture is not mine…or is it? America’s tense relationship with high culture. By Stephanie V Sears London Grip Poetry Review – Alistair Elliot