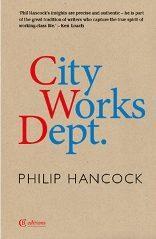 At last, a full-length collection from Philip Hancock. His pamphlets – Hearing Ourselves Think, 2009 and Just Help Yourself, 2016, both from Smiths Knoll – established his individual poetic voice. This, and the way he brings his day-job into his poetry, has made his name one that I watch for in magazines. That day-job marks him out from most poets writing today; Hancock left school at sixteen to serve a City & Guilds craft apprenticeship and has worked, as the title of this collection makes clear, in his Local Authority’s building maintenance department. He writes of the jobs, tools, workmates, charge hands, tricks and short-cuts, and the Tunstall/Stoke streets and street life. In these poems you’ll find skirting boards, a three-stage scaffold, suspended ceilings, pneumatic needle-guns, red-oxide primer, five-litre bottles of PVA. These are, I would guess, outside the experience of most readers of contemporary poetry, as well as a long way from academic creative writing courses.

“To Carry a Ladder”, the opening poem, is twelve lines of practical instruction –

You don’t need a footnote for the local usage of ‘fang’; the context reveals the meaning. The poem is all about the best way to move a ladder with minimum effort and risk of damage; it’s about lift and balance and maintaining the perfect line. It earns approving recognition from anyone who’s had to carry a ladder any distance. The syntax echoes local use just enough to place it within non-standard English, but not enough to make the reader stumble. If it’s also a metaphor for writing a poem then that’s something we bookish readers bring to it because that’s what we look for. It isn’t a poem that flaunts its literariness or dallies with adjectival scene-setting. It’s about doing a job, skilfully and naturally, until it becomes instinctive.

That’s how Hancock’s poems work; they have a direct, instinctive feel for weight, texture, place and people, whether these be family or workmates. “Pudding, peas and gravy” recounts Friday’s lunchtime routine ; the gaffer sending the apprentice off to the chippy, the return journey taking in ‘Naylor’s long windows’, Darlo’s mob outside the Sneyd Arms, women from the pot banks, the office girl ‘Tupperware box on her lap, nibbling / in the memorial gardens.’ It’s an ordinary Friday in an ordinary town, but Hancock is showing something we wouldn’t notice – the way the scene fits together socially, the invisible pecking order. In “Apprentice” Tunstall’s market place is seen from above, next to the Town Hall, where the apprentice has been set to ‘Whitewashing the skylights: doddle of a job.’ From that height the town’s life is separate but connected:

In the midst of life we are in death and the end of the poem recalls the second stanza – ‘You’d better have your wits about you up there,/ the chargehand warned. You’ll only fall once.’ Hugo Williams, writing on the cover, praises Hancock’s ‘cheeky urban insights’; the poems wear them lightly but effectively. In “Mr Gaunt’s Class” the painters stand aside as the ‘boy girl, boy girl’ obediently walk down the infant’s corridor, following instructions from the ‘navy pinstripe’ to keep inside the chevron barrier tape. He, alas, knows better – ‘The dado/ scuffed by his hip will have to be repainted’ – while the painters, heads down, know that white spirit won’t clean his suit. The them/us social order is quietly underscored.

Hancock’s lexicon comes from his work – the flat-bed Iveco truck, the 10×10-foot tower, the RSJs, – as does his realistic view of pay and team work. “Girder bashers” opens

Who among us would notice a gang repainting the underside of a bridge on an overworked dual carriageway as we drive towards the M6? Hancock is one of this team yet his poetry and literary pursuits mark him off. In “Knowing One’s Place” he shows this in just twelve lines, reading a book during a break, the cover disguised ‘… with Stoke City’s / ’79 season first team pull-out.’

Book title hidden, the lapse into idiom, a diversion to the shared bond of football: one of the lads and no questions asked. But the reader knows from the first stanza what’s under the newspaper cover – ‘I’m on that beach with Meursault, / the sun of Algiers unforgiving,’: Camus’ L’Étranger. The Outsider. Hancock, for all his team spirit, is an outsider too. Even so, he relishes the wet afternoons, rained off and the team looking for ways to pass the time. If you have builders working nearby you might not want to read “Rained Off”, with its detailed description of how to make a pipe gun. As he says in the final line, ‘Sheer luck no one came breezing in.’

Fortunately for poetry readers Hancock has supporters who recognise how good his poetry is, how clear and engaged with the hands-on reality of the world. This collection is dedicated to Michael Laskey, the publisher of Hancock’s two pamphlets, who gave him early mentoring through the Smiths Knoll Mentoring Scheme. It’s good to see this sustained encouragement repaid with this well-deserved dedication. CB Editions, after ten years’ work, is now publishing fewer titles – I’m glad this one is one made it on to the list.