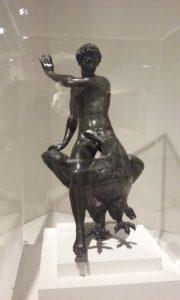 An enthralling survey of ancient myths is the central idea of Ovid’s exhibition at Scuderie del Quirinale in Rome.  Ovid interpreted and sometimes created the tradition of classical mythology in his most famous poem, Metamorphoses.  He was an aristocrat and an intellectual who clashed with emperor Augustus’ moral reforms.  For this reason, Augustus exiled him to Tomis, a remote town on the Black Sea, where the poet died ten years later.

Ovid’s free thinking and open criticism to a moral interpretation of myths is clearly pointed out in the exhibition and well explained in the captions.  Starting from the first room, the viewer is well aware of the paramount importance of Ovid’s works both in the past and today.  From the Middle Ages to the Renaissance, his books were copied by hand then published in printed editions spreading throughout Europe.  Ovid’s words are still meaningful today in the installation in coloured neon, ‘Maxima Proposito (Ovid)’ (2017) by the American artist Joseph Kosuth.  It is a selection of writings in English and Latin from Metamorphoses testifying the still relevant and inspirational quality of the myths.

Love is central to Ovid’s oeuvre in all its forms: eroticism, seduction, passion as well as how to discipline desire.  His libertine vision was in contrast with Augustus and his wife Livia’s reforms that meant to renew pax deorum (divine harmony) and devotion to the gods, aiming to give stability to the Roman empire.  Ovid clashes with this view mocking the gods as frivolous, malicious, ruthless in their revenge and insatiable in love.

The examples are numberless and well explained throughout the exhibition with engrossing works of art, mainly sculptures from the Roman period but also pictures by Botticelli, Tintoretto, Domenichino, Saraceni and Poussin, and thought-provoking descriptions.  The ambiguous and falsely chaste image of Venus Pudica (modest Venus), covering her private parts, is revealed in the illicit love affair of Venus and Mars.  Another example is in the slaughter of the Niobids, a ferocious massacre of young innocents by the hands of Apollo and Diana.  The goddess shows her vengefulness and cruelty in the story of Actaeon as well, who sees her naked by chance and is transformed into a stag then devoured by his own hounds.  In a similar way, the satyr Marsyas, who dared challenge Apollo in a music contest, loses and is flayed alive as punishment.

The best example of Ovid’s exposure of the gods’ eccentricities and his criticism of Augustus’ policy, is expressed in the way he narrates Jupiter’s affairs, revealing the lack of morality of the lord of heavens and protector of Rome.  Ovid’s Jupiter is a seducer, an insatiable lover, using any means in order to fulfil his desires.  His victims are defenceless girls, young men and honest married women he conquers using trickeries and disguises.  He transforms into a swan to rape Leda, a white bull to abduct Europa, an eagle to kidnap Ganymede, and golden rain to conquer Danaë.  The gods worshipped by Augustus are not impeccable examples of morality, on the contrary, they are capricious and subjected by their passions and whims, eventually cruel to the extreme.  Ovid’s undermining of the reputation of the gods brought Augustus to exile him.

The exhibition continues on to the second floor focusing on stories of love, rape and abandonment such as the myths of Ariadne, Proserpina and Ganymede.  Love is an obsession, so powerful that it cannot be controlled.  It triggers action and eventually transforms the victim in a goddess or dooms her forever.  Women are usually powerless in the face of the authority of the gods.  They are forced to submit both to rape and to transformation or to invoke transformation to avoid rape as in Apollo and Daphne’s story.

The most tragic story is the myth of Narcissus, where Echo, who is desperately in love with him, consumes herself to the point of being reduced to her voice.  Narcissus rejects whoever is in love with him and finally loses his head for his own image reflected in water.  As Tiresias predicted ‘so long as he never knows himself’ he will live.  This is an ambiguous prophesy that implies the dangers of egocentrism.  The only character who seems to thrive after his abduction, rape and abandonment is Ganymede.  He is not punished or transformed but ‘promoted’ to the role of cup-bearer of the gods.

At the end of Metamorphoses, Ovid envisages his future everlasting fame.  His works will be used by great writers such as Francis Bacon, Dante, Shakespeare, Milton, Joyce, T.S Eliot and Bob Dylan.  The poet’s emphasis on change, a constant becoming of all the forms and aspects of the universe, reflects our modern vision of life.  This lack of stability, that Ovid took from the philosopher Heraclitus, stresses the proximity of all the forms: humans, gods, animals, plants and minerals.  There is a reciprocal influence and a constant tension between the different natures where new shapes keep what is possible of the old ones, which are never completely effaced in the transformation, as Calvino claims in his essay ‘Ovidio e la contiguità universale’ (Ovid and the universal proximity).  Eventually, it is not a total change but a process.  For the preservation of the species, survival is fundamental: ‘everything changes, nothing dies, the everything flows, and every image is transformed in movement’.

The exhibition shows in an effective, stimulating way how Ovid’s works influenced our culture and storytelling from ancient time until today, thanks to a vision centred on the constant becoming of being human.  It entails transformation but also continuity and encompasses all forms present in nature.  Interesting descriptions and significant works of art complete the display giving a thorough perspective to the viewer.