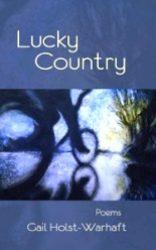 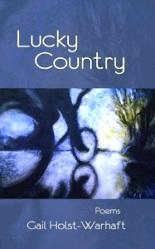 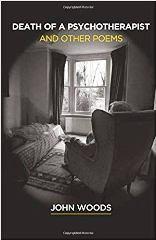 Lucky Country is a delight. Its author, a one-time professional musician who in the 1970s toured Greece, performing with Theodorakis, has written the standard work on Rembetika. She is also an accomplished poet and translator who has written a good deal about Greece, in poetry and prose, but the opening, substantial section of her new collection focusses on Australia, the country where she spent her formative years. The poem from which the book’s title comes begins

The tone, relaxed, assured, wryly comic, may at first seem more suited to prose than verse; but this is to reckon without Holst-Warhaft’s adroit manipulation of line endings and stanza breaks. Think how much would be lost without the ‘turns’ of ‘Among descendents // of convicts and their keepers he could become / a gentleman.’ Such seemingly casual adjustments of voice required by line breaks operate throughout. Quite without grand-standing, Holst shows herself to be a most accomplished technician.

Technique serves her especially well when she is considering the complex history of Australia’s relationship to England. Hence, the opening of “On My Mother’s Map”: ‘How brave it looked in the schoolbooks,/ this big and blushing continent / empty of history, stamped / like a royal seal on the sea!’ I don’t think she needs the exclamation mark: the absurd, in its way awe-inspiring, claims of ownership to a vast land ‘empty of history’ tells its own story; certainly the blushing continent, figured as red for Empire, a blushing virgin territory, is devastatingly witty, as are the closing lines, recording ‘the outlines made / by men with pens and compass / who measured the ins and outs / of coasts from little boats.’ Compare and contrast, as the exam papers used to say, Conrad’s Marlow reporting on French cutters firing off guns into the ‘empty immensity’ of the African continent.

Lucky Country is, however, peopled by the poet’s family and friends, seen in acute close-up, where, for example, the women of her mother’s generation ‘wore hats with spotted veils / adding a touch of imperfection to matte / peach skin. Cigarettes were lit / with gold lighters, never with matches’, or where, in other poems about her mother, a life is evoked in a few, telling details, as in the flowers in Melbourne – ‘love-in-the mist … snap-dragon … sweet Alice’ are ‘planted by the homesick,/ balsam in the colonial bush, [and] eclipsed native flowers / that spoke a subaltern tongue.’

Later sections of this lovely book take us to different landscapes – New York’s Ithaca, Naples, Lisbon, but all are linked by a remarkably consistent, open-eyed, and exact registering of lives and circumstances, of a kind all too rare in a world now devoted to selfhood, selfies, me-too-ism, and a demand for respect which seems rarely to flow outward, as Holst-Warhaft’s does. The collection ends with “Three Poems for Jon Stallworthy”, the poet and scholar who died in 2014, and with whom Holst-Warhaft formed over the years a close and sustaining friendship, one founded on a mutual respect most finely evoked in “Re-Enactment” with its account of how the two met for dinner, ‘ignorant of the dark mass // couched in your throat, the strangler / about to close its grip.’ The poem, in three parts, ends with the adumbration of a late love affair between Stallworthy and a woman who sits beside his bed where, wordless, they come together ‘in the presence of an unexpected rapture / that lit the hours before the darkness.’ ‘Unexpected rapture’ may seem an unguardedly grand claim but it is after all poised against, and precedes, the final words, ‘the darkness’; and why after all shouldn’t a poem endorse the worth of late love. Holst-Warhaft’s readiness to discard caution in this instance seems to me evidence of her quality as a poet. She isn’t a praise poet but for what she accomplishes in Lucky Country she certainly merits much praise.

John Woods isn’t a professional poet, but nor is he a hapless amateur. He isn’t one of those self-proclaimed ‘poets’ who offer up verse, ‘all out of shape from toe to top’ because they can’t write a literate sentence to save their lives. The prose section that ends his book is lucid and immaculately written. And as the verse that precedes this in Death of a Psychotherapist reveals, Woods is intelligent, well-read – he makes good use of allusions to Eliot and Yeats –, and he has a most extraordinary story to tell. Here is how the title poem, which is in five short parts, begins:

At which point the common reader may feel like closing the book and running for cover. Don’t, is my advice. Stay the course. The fifth section opens with a question. ‘You want to be a psychotherapist?/ Then pray that the learning is long / and that you visit many places, speak to many people / before you find you have nothing they want.’ OK? Got that? If not, the closing lines, from Cavafy’s great poem “Ithaca” will enlighten you. ‘Ithaca gave you the wondrous journey:/ Without her you would never have set out./ But she has no more to give you.’ Woods uses the 1941 translation by E. Sachperoglou. Keeley and Sherard give ‘marvelous journey’ which, although I am no Greek scholar, feels to me truer to the Greek. At all events, ‘marvelous,’ with its connotation of ‘concerned with the supernatural’ certainly gets close to the matter of his poem.

Because although Woods wants finally to confirm a natural or anyway rational explanation for the profound delusions from which he suffers as a result of brain cancer and its treatment, there is inevitably a sense that such explanation can’t fully make sense of what has occurred. By which I mean that, to this reader at least, explanation lies somewhere on or even beyond the far side of rationality. There is, for example, a most compelling moment in Section III, when Woods finds himself in dialogue with Cavafy, who ‘shimmers so I know he is dead,’ and tells him

Given that we are told Cavafy is silent, I assume the parents referred to here are Woods’, so that we must infer his sense of being alone, without, as it were, the means to identify himself. In the next section therefore (at all events I assume we have to assume the consequentiality) Woods gazes

The sixteenth floor is presumably that of the hospital where he is and from where he looks at a bomb-site – which leads him then to Yeats’s airman in the clouds, whose ‘lonely impulse of delight’ prompts ‘this tumult in the clouds’ from which he chooses to plunge to his death. In fact, Robert Gregory didn’t commit suicide, as was thought at the moment Yeats wrote his poem, he was downed by ‘friendly fire’, but in likening himself to Cavafy, Woods is seeking to justify or explain his own tumult, his love, through allusion, though love for whom is obscure: ‘The treatment is killing the illness./ Maybe it is killing me./ I can love you no more.’ But ‘you’ here is irredemiably mysterious. And this is why I find “Death of a Psychotherapist” to be on the far side of rationality. It ends with a reprise of “Ithaca” which is also an adaptation:

I take it that the ambiguity of the last line is deliberate: not yourself have survived (cancer or the treatment might have killed you) and not survived / gone beyond the self which began the journey.

The poems that follow are short, ‘a fragment from which to divine the whole’ as one of them puts it, and while of interest, lack the speculative, defamiliarising intensity of the long work. A brief essay, “Poetry, Cancer and Psychotherapy: Note on Death of a Psychotherapist and Other Poems” is helpful, lucid, and judiciously placed at the end of the book so as not to ‘tame’ the sheer force of the long poem with which the collection opens, and which makes it so remarkable. The back cover carries encomiums to Woods’ work from several psychoanalysts, all of whom attest to what one of them calls its sharp-edged power. Yes, indeed. Those proud to call themselves poets could learn much from Death of a Psychotherapist.