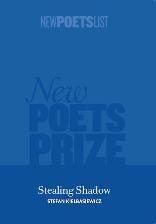 Stealing Shadow is – as the title suggests – a book of shadows, fleeting glances at past memories, encounters with strangers, life in a foreign land and revisited childhood. Like all shadows they lurk in the poet’s subconscious and are expressed in an effective and tangible manner, to such an extent that the reader begins to inhabit the shadows too.

The pamphlet opens with a poem called “Marie” where the author meets a French woman in ‘a hostel called Clink.’ He asks her where she is from and ‘She points / at her necklace: CANNES.’ When he asks what brought her to London she answers ‘to start a new life / ici.’ The poet proceeds to imagine a ‘room upstairs’ where ‘Marie kneels / next to her luggage / does makeup next to a seventy year old man / changing trousers.’ Their relationship though short lived continues as ‘The next day at breakfast, Marie / takes out her notebook and shows me / her five year plan: learn English by January, then move to Miami.’ We also find out that whatever job she has been doing, she still has not been paid, so ‘One night / she leaves her luggage and sleeps outside’ Finally the poet concludes that:

This poem is one of the most effective in the pamphlet as it shows the flitting transparency and ephemeral value of human experience in the context of the varied identities, hopes and dreams we all possess and which unite us in this world, whether it be a lasting relationship or a momentary connection.

Another poem that caught my interest was “A Supermarket in England”. The author finds himself in an English supermarket where there is ‘fluorescent light’ and everywhere is ‘stocked to the teeth with daily necessities’. He collects ‘British Eggs British Flour / British Butter British Beef British Chicken’ and with a sense of acute irony he states in the next line: ‘soon enough I will be a British Citizen’ He goes on to say:

Here we see the poet satirising and parodying the concept of being a British Citizen and the sense of Englishness and what it entails, and he does this with lively dexterity and wit.

Further into the pamphlet there is a sequence of short poems without titles. One of these is worth quoting in full as it is a striking piece:

This fine poem expresses succinctly the hidden depths of emotion, feeling and substance that grow within the human mind and spirit while manifesting itself in different and concrete forms within the world we experience.

The next member of this sequence of untitled poems is also worth quoting in full as it has the same persuasive and insightful thoughts on the human condition as the previous poem.

The fateful imagery, the fatalistic empathy of death in a utopia and the very questioning of the necessity and value of a utopia – these are all examined here in a clear, concise, reflective and sentimental manner which the critic and the poet can comprehensively identify with.

In conclusion, this may be a small pamphlet, but within its 36 pages are a few hidden poetic gems which deal with identity in a globalised world. The poet seems to feel out of place, without a home of his own – a continual refugee. Like a passenger on a train with no end to his journey, the author views many differing sights, sounds, experiences and people, and they are all eventually left behind in the shadows. He relates this to the reader using reflective and versatile poetic language, form and style, coupled with some innovative images and writing like ’Feed a dog the offering / from your table, and she won’t follow / the familiar scent of sacrifice –‘ This pamphlet is an arresting tale of one man’s journey to find his identity among the shadows of his memories.