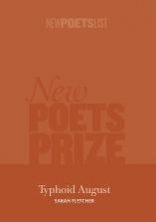 In Typhoid August the poet-narrator almost holds a conversation with herself about the pain, suffering and oblique nature of her relationships with men and her female acquaintances. The verse and language are coloured by bouts of vitriolic anger and there is not much sympathy or forgiveness but more of a twisted irony which lends itself to bleakness and caustic imagery.

And once the waltzing is over she

Then we find out that ‘She dresses beautifully/like the girl who bullied the school shooter’ and finally, ‘in another life / we get cappuccinos and she tells me what sex with my boyfriend is like’. The last line informs us:

Sex, betrayal, bitchiness and a moral sense of ugliness inhabit this poem and it sets the tone for the rest of the pieces in this pamphlet.

“Christina Crashes The Wedding” again illustrates the poet’s struggle with her rivals in love and in life. The troublesome “Christina” is invited because ‘she’d be noticed more by her absence / and her absence would be seen by other guests.’ Then the poet witnesses her-

The rest of the poem gently unfolds with references to ‘the richest pinot noir’, ‘you should have worn a bra’ and ‘The stiff tips of my nipples give the wrong signal’ and finally tells us

This last is an observation verging on the paranoid, in a poem tainted with jealousy, insecurity and anxiety. Nevertheless I do enjoy the sporadic layout of the poem which in its mixed up way offers perhaps an insight into a chaotic state of mind.

The poem “Psychology” offers greater insight into its narrator’s sexual anxieties and is worth reproducing here in full:

Thus once again the poet appears to bare all and give the reader a graphic insight into her psychology of sex and intimacy. It is frank and explicit which might not be to every readers taste as the pamphlet’s narrator examines and lays bare all her insecurities about those she has loved and been intimate with, which results in the poems being highly personal – there are no secrets here and so it makes for rather an unsettling read.

The final poem I will mention, the one that charmed me most in the pamphlet is “The Occupant” which deals with a person who stays with the poet and her husband for three months. There is a vivid description of that person – ‘His body was a terrible anchor and the lichen / he brought with him soiled our couch:’ Also ‘His voice was a museum of aristocracy,/ the tiny violins of his breathing shrilling us awake at night’(some inventive imagery here). Over the period of his stay they ‘cooked him dinner, and ignored the tobacco / moulting from his skin.’ They even ‘learned to love him.’ And what follows is an appealing and effective simile in which they loved him ‘as a landscape/in which our lives unfolded indelicately as / origami swans undressing into their paper square.’ This is potent poetry and the most powerful image of the pamphlet. Eventually “The Occupant” departs suddenly: ‘One day he got up and left. Something about a girl.’ Nevertheless there is a suspicion or hope of his return: ‘My husband and I orbited silently around each other for a week, / fixing a third drink each night in case he returned, still.’ In my opinion this is the most poetic and adroit piece in the pamphlet, and illustrates the intense quality of Fletcher’s writing. This is because this poem is her most settled and most structurally ordered and leaves out the confessional element, replacing it with a more engaging subject matter written with a literary finesse.

Much of Typhoid August is a litany of anxieties and insecurities concerning sexuality and relationships. Sometimes verging on paranoid and confessional, it is both graphic and to the point. Some readers might appreciate this but others may not. For my own part I saw greater poetic potential in poems like “The Occupant” with its alluring imagery which bypassed the style and subject matter of a narrator laying herself completely bare.