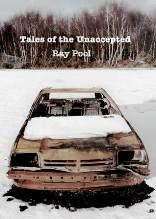 Tales of the Unaccepted is a collection of wise, understated poems coloured with humour and irony. The poems are a rollercoaster of profound reflections, anecdotes, encounters and keen observations of human nature engagingly and readably expressed.

Mild nostalgia colours the ‘now-drowned sky’ of “The Bells of St. Peter’s, Dunwich” which opens the collection. This is also mirrored in memories of the poet’s parents ‘in sepia heaven’ (“Mum and Dad”) and in the poem “Steam Dreams” where the poet and his brother dream of ‘Meccano sets’ and unachievable adventures.

It seems that the achievements of human beings are temporary and perhaps not precious; they will be covered up or erased. However, they might gain a certain weight in time. This is the tale of the unaccepted, or unimportant – ‘the misfit’ (“Corners”), whose life passes by, undetected, as often happens to the majority of people. They are not noticed, they are not ‘top men in charge’, but are still there with their presence and significance.

Music comes back in “Take the Quatrain”, where the pressing rhythm of the lines involves the reader in a cascade of sounds, repetitions and alliterations, alluding to unfulfilled dreams:

An effective use of repetitions and alliterations is also achieved in the poem “World of Plastic”:

The insistence on the word ‘plastic’ and its variations culminates in the last couplet, which emphasises the artificiality of the modern plastic world and the illusory, diminishing quality of its expectations.

The transitory yet joyful essence of life is depicted in the observation of a goldcrest, a ‘tiny miracle of movement and colour’, visiting the poet’s garden:

The eloquent description catches the instant the poet sees the bird, and an elusive statement concludes the poem:

A vital part of the collection’s poems resides in the subtle understated revelation of the almost inconclusive hopes of human beings, and in the necessity to acknowledge that we live ‘near an exit slip’:

This seems to be the human state, which is inevitably marginal yet at the same time, worth living in its unpredictable openness to ‘new life to welcome in’. The unaccepted, the odd, have their space of enjoyment, which will never be totally erased, and survives in spite of the final unavoidable ending: