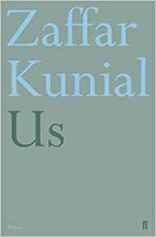 The best poetry is nearly always an attempt at understanding, a way of negotiating pathways from the known and familiar towards the unknown, a contention which is exemplified by ‘Fielder’, the opening poem in Zaffar Kunial’s debut collection Us. The carefully composed syntax of its opening lines shows his concern to locate precisely the origins of this particular poem and, by extension, the quest it embodies:

However, before too long, the protagonist finds that he is searching for something more than just a lost cricket ball, as it evolves from ‘that small, seamed planet’ into a ‘world restored’ and he emerges from the bushes like ‘some astronaut, or lost explorer’.

Moreover, it soon becomes clear that Kunial’s search for meaning arises from his mixed race heritage. Born in Birmingham of an English mother and a father who comes from Kashmir, it is no coincidence that the context of Kunial’s opening poem is a game invented by the English but which has been so passionately adopted throughout the Indian subcontinent. In ‘Self Portrait as Bottom’ the poet’s desire to explore his family roots involves him taking a DNA test. He discovers that, genetically at least, he is ‘50% Europe, 50% Asia’. However, this simplistic paradigm breaks down into further fractions. On his mother’s side he is 17% Ireland; 3% Scandinavia’. Even his father has inherited ‘2% West Asia, or Caucasus’. It is clear, however, throughout this collection that one’s identity cannot be reduced to a formula and that one’s sense of belonging arises from a complex web of history, culture and language.

In ‘The Word’ a son is struck by the idiosyncratic English of his father who is exhorting him to get out of the house and ‘enjoy the life’. In ‘Empty Words’, his father’s pronunciation of ‘realm’ is a full rhyme with ‘Jhelum’ – a linguistic feature familiar to this reviewer from the speech of his own Irish parents. In ‘Hill Speak’, Kunial explores in more detail his father’s native tongue and it soon becomes apparent that even his father’s sense of identity is by no means clear cut. For a start, there is no dictionary for the tongue he speaks and it’s not certain whether it should be considered a ‘language’ or a ‘dialect’. Even its name is disputed. In the words of a taxi driver who also speaks it:

I have sometimes come across a similar sense of deprecation bordering on shame when I have spoken with Irish speakers from Connemara. Nonetheless, even though the poet speaks and writes in a language of ‘many dictionaries’ it is not always easy for him to say what he means:

Frequently, one’s sense of identity boils down to a question of allegiances. The point of departure for ‘Spider Trees, Pakistan’ is a quote from William Dalrymple’s The Last Mughal. Contemplating the lives of the British and the Mughals in the days of the Raj, the poet finds it impossible to bridge the gap between ‘Worlds I can’t marry’. In another poem, ‘You’, one feels that history is merely a concocted narrative in which the interpretation of events depends upon which side you are on. An outbreak of violence may be called a ‘Mutiny’ or a ‘Rebellion’. It is ‘Words and words / only’, concludes the poet. Even a simple pronoun can be a source of unease. In one of the most powerful moments in the entire collection, the poet’s father laments the fact that he ‘can’t make good fist / of speech like you. Because of you’. The poet is forced to ask himself whether this pronoun is plural and directed against the British or singular perhaps and directed against his mother.

Even when his father has returned to his native village in Kashmir, there is no escape from the claims of history. In ‘Jute’, a small group of Pashto-speaking Afghans are passing through, but lay claim to his father’s house. At least on this occasion, his visiting son’s allegiance is unequivocal: ‘But it’s not Dad. / It’s yours’. In ‘I’, the poet traces a link between his own first name and that of Zafar, the last Mughal emperor, deposed by the British and also a poet. Here, as in so many of Kunial’s poems, he forges cross-cultural links, when the plight of the unfortunate Zafar reminds him of Shakespeare’s Richard II. In ‘Prayer’, the Islamic Takbir Alla hu Akbar rubs shoulders with a quote from the Anglican poet George Herbert.

In the course of ‘Ys’, the collection’s concluding sequence, we learn that Kunial came late to the study of literature and that he only read his first novel, Hanif Kureishi’s The Buddha of Suburbia, when he was nineteen. To judge by the numerous references to English literature in these poems, from Anglo Saxon, Middle English, the Renaissance and beyond, he has certainly been making up for lost time. Moreover, he has a Heaneyesque relish in not only the sounds but even the shapes of words, so that the ‘ff’ in Jane Austen’s ‘yrs affect / JA’ reminds him of his first childish attempts at writing his own name. In his two haiku sequences ‘Empty Words’, the title of which is surely meant to be ironic, his approach is reminiscent of Heaneys ‘Alphabets’:

Finally, mention should be made of ‘Us’, Kunial’s subtle and engaging title poem which brings together many of the themes explored elsewhere:

In the end, however, the poet seems unable to locate his ideal community, his true homeland: ‘When it comes to us, colour me unsure’, he says, though still aspiring towards it and determined to continue his quest. Intelligent, authentic and, above all, humane, Zaffar Kunial’s Us is a memorable and poignant debut. Convincingly rooted in personal experience, it nonetheless touches upon issues of wide-ranging significance.