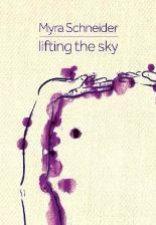 Poetry readers can pick up a new collection from Myra Schneider with absolute confidence that there is quality within. Penelope Shuttle comments in ARtemis poetry, that ‘This poet, enters the daunting yet essential regions where we face ordeals and seek understanding in and out of the toughest places in the world, both private and public.’ Schneider’s tenth full collection amply fulfils this expectation.

This is a book in three sections, which from the first poem, a sonnet in block form, offers a landscape viewed through the lens of nature, archaeology, and history. ‘Winterlight’, opens with a bleak image in a section where shadowy places are explored.

but in the 4th line, ‘a delicate stroke in a Chinese painting’, the poet shifts away from the dissolving garden into a piece of art: The volte is placed deftly in the middle of line 8 where she recalls entering the stone passage and inner chamber to Maeshowe Neolithic tomb:

Within the passage, as within her very being, the poet-protagonist finds:

Images of hope/fulfilment crop up in subtle ways throughout a significant collection where big themes are taken on boldly. The impact of time on material is addressed in the second poem, ‘The Stone’ where the poet spies a rock: ‘I spot the emerald fist,’ then weeks later, having taken the piece home with her, discovers it again in a drawer:

Surprised, but undaunted, she turns it over in her hand and in her mind’s eye, finding history there that is both universal and intimate.

Archaeology also provides the vehicle for her poem ‘Sutton Hoo’, the late 6th, early 7th century cemetery in Suffolk. This is a longer poem populated with individuals on a tour of the site who find themselves immersed in a past where archaeologists first discover the funeral mound: ‘…a girl with whose flaxen hair is ribboned with pink’ who becomes the poet’s smaller self; then later ‘…the man whose camera dangles above his pudding belly, stops taking photos…’ The poet asks:

She goes on to ponder the meaning of what is found in the grave, the poignancy of identifying signs of previous lives, but no actual remains of the body buried there, learning that ‘…acid in the sand / is strong enough, over time, to dissolve / bone…’ in a way that relates to her own mortality, to that of her grandparents who grew up in a small village near the Vitebsk of Chagall, her parents’ life as immigrants in London. She pulls the strands of the personal and universal together expertly in the final stanza, recognising how:

A satisfying Schneider collection always contains some good ekphrastic poems and this one does not disappoint. In ‘Dunwich’, she muses on the J.M.W. Turner painting with that title and utilises physical imagery to depict the scene:

In the closing stanzas, the poet gazes at the ocean ‘docile as a sleeping dog.’

The penultimate poem in Part One, ‘The Pear Tree’, brackets the winter pear tree of the opening poem, now seen in April: ‘It arose with an intensity I cannot put into words…’ but going on to do so, she concludes with another sign of hope:

Part Two opens with a longer poem, ‘Discovering Medusa’. The myth of the snake-haired gorgon is an ever popular and tantalising subject for writers of all genres. Schneider relates her version from the point of view of Perseus, journeying in his helmet of invisibility, to sever the gorgon’s head to release his mother from an undesirable match. Set out in tercets, the tale is told straightforwardly, the deed achieved without fuss about a third of the way through, though after a goodly amount of scene-setting (ten tercets).

It is after the beheading that the poem takes off in a more contemplative direction. As Perseus recovers from the act, he dreams/visualises the original scene in the temple of Athena where the Goddess punishes the young Medusa for ‘tempting’ her husband, the God, Poseidon. There is a touching moment when the young Medusa, described as ‘a sylph-like girl / robed in saffron’ speaks, saying ‘I want to unfold the truth to you, Perseus.’ She guides him through a scene of violent rape by Poseidon, which differs from his understanding of the story and challenges his perception of what he has done:

Asking myself why this rendition of the story left me slightly disappointed, I went back to an earlier poem by Carol Ann Duffy (‘Medusa’) and realised I was missing the actual voice(s) of Medusa and Perseus, that first-person immediacy. Simply narrated, it did not hold the same power for me, though I was moved by the resolution at the end, when the young warrior’s perception had been so altered that: ‘…Until the day he died / gentle Medusa would be in his head.’

Schneider also has a wonderful whimsical touch with humour. She is tart, if mildly self-deprecating, when she takes on a washing-machine repairman (‘It’s Sensitive’), who chides her about pressing the buttons on her machine too hard:

‘Instructions’ is a hilarious poem about an exercise class in which the participants are told:

The poem, ‘Kitchen’, for me was a real treat; Schneider back into the family history business she does so brilliantly. Here she creates a microcosm of family with three kitchens and three time-frames. She links the kitchen of the present, her childhood kitchen, and I’d guess, her mother in-law’s kitchen, through news broadcasts and the juice from raspberries dripping from fingers to table. With polished ease she manoeuvres between time periods starting with the present:

Here the kitchen drifts back to her childhood kitchen; ‘…above the Clyde, a utility cloth on the kitchen table’, then back to the present where, as a news broadcast ends, red liquid trickling down her fingers, ‘spots the table’ leading into her mother-in-law’s table, evoking the kitchen of a refugee family in Stamford Hill. In ten graceful lines, Schneider muses on the refugee experience, on the miracle of survival/survivability, as she wipes the spilt raspberry juice (mentioned above), a gesture to wipe away the past, but retain the value and spirit of the memory.

Part Three is a 15-page long narrative sequence, ‘Edge’. Set out as a diary of artistic / emotional breakdown, followed by resolution and restored creativity, it is an ambitious piece opening strongly with the protagonist arriving in Switzerland in August, to a sombre view:

The scene is landscaped for low mood, but where the poet inserts dialogue between the family members, it begins to feel a little stilted. The lines are set out irregularly, perhaps denoting the uncertainty of the protagonist:

The diary continues with quite closely spaced, regular entries, a well-observed narrative of depression, parental guilt, artistic angst, therapy, and eventual return to creativity. Typical conversations, as with a doctor (below), are starkly effective:

It is extremely difficult to write about depression and breakdown if you have not experienced it yourself, and Schneider writes with authority. Nonetheless, and perhaps coming from my own background in mental health, the voice of the protagonist, does not always ring true for me. The way description and dialogue mix with her private fantasies, feels forced within the framework of the diary. However, this is a heroic attempt, and the ending is delicately understated as Mirie plans to begin:

This is a big collection, coming well into an impressive poetry career, with so much to admire. Rich imagery, a restless search for meaning, a sense of finding hope in nature, serenity in qigong, all play a role as Myra Schneider lifts the sky on humanity again.