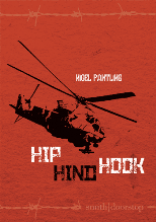 The odd title of this collection, Hip Hind Hook, is partially explained by its cover image. But most readers will not understand it until they come to the title poem about halfway through the book. Its epigraph, drawn from a (possibly fictitious) military handbook, tells us that, during the Cold War (and possibly still today?) there were (are?) NATO code names for the weapons used by Warsaw Pact nations. (I myself recall Soviet fighter planes of the 1950s having bizarre names beginning with ‘F’ like ‘Fishbed’ and ‘Faggot’.) This book is named using three of the strange ‘H-words’ which denote different types of helicopter; and, as with Pantling’s previous collections, the theme of army life runs strongly through it.

The opening line of the title poem “Yesterday it was helicopters” is surely an intentional reference to Henry Reed’s famous ‘Naming of Parts’ with its gentle but effective subversion of military vocabulary and mindset. Henry Reed was, I think, a reluctant conscript whereas Pantling served as a regular soldier; but this collection does not necessarily show respect for all aspects of army regulation and discipline. The prevailing tone is one of cool detachment, often preceding a final punch-line which punctures pomposity or undermines the official version of some event.

Broadly speaking, Pantling gives us three kinds of poem in this collection. One type deals with the human and domestic side of army life; a second serves as a commentary on phrases from the military handbook already mentioned; and the third group consists of pen portraits of fellow soldiers (all but one of which are claimed to be creatures of his imagination). The poems are set in Germany during the Cold war and are mostly concerned with life in the British Army on the Rhine. Only occasionally are there interactions with the civilian population. After lessons in Colloquial German, for instance, soldiers are sent into town “to test our skills on locals too polite / to reply using their perfect English.” More intimate contact with the locals occurs in ‘Detente’ when high-level political moves towards East-West understanding are mirrored by the narrator’s private negotiations with Hildegard “whose English is good enough / to encourage our Entspannung.”

Throughout the book, Pantling captures authentic-sounding snatches of conversation. In the opening poem, for example, a sergeant shows a young officer to his new quarters and explains

He also apologises that the carpet only partly covers the floor: “you have to be a major before it reaches the walls.”

‘Dinner in the Mess’ catches some very particular flavours of army life which will, I suspect, be unfamiliar to most readers: “Regimental silver down the centre of the table … crested china under monogrammed silver napkins, … glasses of port standing ready like ruby sentries.” On the other hand, ‘Mixed Doubles’ shows that husbands and wives can be susceptible to the same temptations in service life as they might be in civvie street. In the women’s ward of the military hospital however rank does make a difference:

Poems that deal more directly with weaponry and fighting sometimes reveal unexpected information. Some of us may recall televised pictures from the Soviet era which showed seemingly endless May Day parades of tanks, guns and rockets through Red Square. But each of these displays was “(we now know) … a closed loop round a Moscow block.” And it wasn’t just the other side that could pull a fast one: a British officer, investigating the devastating explosion of a gun during practice firing, remarks

The far-fetched nature of any duplicity involved in these two incidents is well-matched by the totally imaginary manoeuvres described in ‘Tactical Exercise Without Troops’.

The eight 12-line pen portraits of fellow-soldiers, presented as pairs on facing pages, are both knowing and affectionate about the strengths and failings of their subjects. These may in fact be composite characters rather than actual individuals; but they do sound authentic. We learn of Bombardier B who “can make things disappear … which gets in the way of further promotion.” Sergeant H may be “weak at reading, weaker still at writing” but has mastered the trick of “firing two rounds twenty seconds apart / to hit the same target simultaneously.” (I am still thinking about that – but I suppose the first shell is dispatched with a higher trajectory than the second.) I am particularly fond of Sergeant Major C whose quiet “ ’I wouldn’t do that if I were you, Sir’ / has saved several subalterns’ careers.”

Inevitably, the choice of subject matter means that this collection does not have very broad horizons. The poems are mostly based upon observation of outward behaviour and any imaginative or emotional content is pretty understated. (Not that understatement always lacks power: the poem ‘Stammlager 311c’ describes the site of a former concentration camp and startles us by noting “the guilty silence of the birds.”) Nevertheless, these are very accessible poems, well crafted and shaped with deft choices of word and phrase. They mostly have a strong narrative thread and avoid mystifying use of military jargon. They present a sympathetic view of army life which is by no means uncritical and which recognizes how unfamiliar its assumptions and conventions will be to most of the readers. These features make the book an easy read but also one which rewards a second and third look.