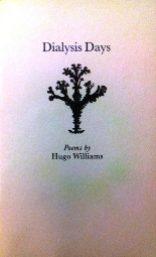 For several years Hugo Williams underwent dialysis three or four times a week and he has described this experience very vividly in a group of poems in his 2015 collection I Knew the Bride. In his new chapbook Dialysis Days he revisits those sessions at the clinic but now from the viewpoint of someone who is a recovered patient by virtue of having received a kidney transplant. This organ donation is referred to only in the final poem – and then in a very low-key fashion

This understated mention of a life-changing event does not, I think, undervalue its importance but refuses to dramatise it by, for instance, intruding on the privacy of the donor by speculating about her/his identity. Gratitude is expressed more directly in the opening lines of the book’s first poem (a loose villanelle): “Being well is such a brilliant trick / with all its happy healthy fun.” This positivity is however somewhat undermined by the subsequent, rather jaundiced, remark “Nobody likes you when you’re sick.” Williams has evidently come to the conclusion that in order to get through a long illness “you end up having to mimic / the way healthy people carry on.”

After this guardedly optimistic beginning, the book goes back to the start of Williams’ illness when, alarmingly, he finds “my body is turning itself /into a makeshift kidney.” With wry detachment he reflects that the consequent requirement for him to have regular dialysis means that “for the first time in my life / I have a regular job to go to.” This job is

Visits to the clinic bring the poet into regular contact with other patients such as Popeye, the man who speaks only in clichés and greets the “assembled corpses” in the waiting room

Some members of the hospital staff make more congenial company, however – especially the African nurses.

and the poet feels a strong kinship with them – even when they wake him up in the middle of the night – because both he and they are “crying to be taken home / to our lost villages.” He is, however, less well-disposed to the doctor who conducts an interview while drinking from a leaky cup so that “coffee rings chase one another / around my assessment form.” And he is understandably reluctant when

With the rare exception of extravagant images like the fanciful “lever beside my bed / which raises and lowers / the steeple of Highgate church” the poems in this collection are quiet, measured in pace, using well-chosen words and well-weighted phrases to give a hauntingly authentic impression of the tedium and uncertainty of a long illness. As we have already seen, the poems are sometimes leavened by dry humour and wry observation. But they are also honest about the worst moments, such as a time when delirium leaves the poet “blubbing, terrified, lost / as I try but fail to exist.” Further attempts to describe this hallucinatory episode yield a typical Williams interior monologue of self-examination

Dialysis Days offers the reader a certain amount of medical information, including the fact that carphology is the term for the compulsive habit, displayed by very ill patients, of plucking at blanket fluff and gathering it into little balls. The poem that takes its title from this condition tells us that sufferers are “sweepers of refuse into / hopeless palaces, gleaners of remnants, / rag-and-bone men of ourselves.” All of which seems uncannily like an unconscious fulfilment of a “prophecy” appearing in Self-Portrait With a Slide: “When I grow up / I’ll pluck at my bedclothes to collect lost thoughts. / I’ll roll them into balls and swallow them.” Such distressing experiences have been consigned to the past, however, and the poet tells us he can now stroll in the grounds of St Pancras Old Church (through which he passed so often on his way to treatment) glad to be “able to ramble occasionally / in this twilit ante-room, / with only one foot in the grave.”