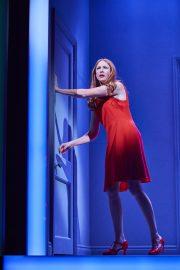 Any story-line involving a single woman is inherently more dramatic than a narrative of a single man because of biology’s cruel deadlines.

With Sondheim’s blessing, director Marianne Elliott takes this as the premise for her stylish and sophisticated update of the 1970 musical comedy Company that changes the lead role Bobby, a man, into Bobbie, a woman.  In the process, Elliott gives us a flowing production that is right for our times – when a 35th birthday is terrifying for a woman who has yet to meet the father of her child but no big deal for a man. Implicitly, it acknowledges every permutation of the girl-doesn’t-meet-boy story that followed Sondheim’s ground-breaking departure from happy-ever-after musicals.

As the lead, Rosalie Craig brings to the part cool, elegant detachment, not the desperation of Bridget Jones.
She looks on in her bright, red dress, not so much jealous as bewildered as she brushes against the mostly drab married lives of the friends who are her only company.

They are a modern diverse bunch, but married or divorced and married again or teetering on the brink. Only Bobbie can’t contemplate commitment to an outdated establishment that ruins your sleep and tangles your identity with another “good and crazy” person.
Bunny Christie’s perfectly-judged design places the orchestra at the top of the stage, while the action unfolds beneath it in an array of boxes separated by endless doors.

We begin with one in a series of 35th birthday celebrations in a claustrophobically small compartment that represents Bobbie’s home, narrowed for now to a table and ansaphone messages from various men. Who knows how suitable any of them is. Bobbie’s problem is an inability to commit to one.

In the first of many vignettes of married life, Gavin Spokes as Harry and Mel Giedroyc as Sarah don’t exactly make the case for life-long partnership. As Harry wrestles with being on the wagon and Sarah diets, Bobbie the temptress, more envied than envying, turns up with a plate of brownies and a bottle of bourbon and demands extra sugar in her coffee.

The husband-wife dialogue, as each seeks to deny the other what they most want, is superbly edgy. It is offset by much broader comedy as the ironic celebration of married life in the song “The Little Things you do Together” is accompanied by the couple’s Jiu-Jitsu moves that amount to attacks and blocked attacks.

Another of the couples Bobbie observes are the twice divorced Joanne (Patti LuPone), now happily-married to Larry (Ben Lewis), who claims to be endlessly fascinated by his hard-drinking, hard-smoking wife.

She seeks to lure Bobbie into all her vices, including offering out her husband for an afternoon and inciting Bobbie to take up smoking with the fond reminiscence: “Remember when everybody used to smoke?… It used to be more festive.”

I can’t claim total familiarity with the original script but the lines smack of the production’s light-touch updating.

Equally, the independent, 21st-century Bobbie, whose means are unexplained, seeks to “get the check”, but Larry beats her to it.

She also seems to express her freedom as the well-oiled set allows her at one point to push off stage one of the boxes that happens to be containing all her married friends, as if to underline her lack of neediness. You might argue that is almost as emotionally unlikely as a happy-ever-after ending, or is it just society’s lingering prejudice that everyone deep-down wants to be in a relationship?
In a production where every dramatic decision makes sense and there are no longueurs, the centre of the action is the song Getting Married Today.

The happy couple is made up of the serene Paul (Alex Gaumond) and Jamie, played by an hilariously manic Jonathan Bailey, whose cold feet and rapid-flow anxiety are a tour de force, accompanied by all sorts of onstage hijinks, including Daisy Maywood as an operatic priest, salivating to perform the ceremony Jamie dreads.

The tension melts into calm in the following scene with Bobbie alone on an otherwise empty stage singing Marry Me a Little with its cry for emotional independence. It’s a mark of how far feminism has come that a woman director has cast another woman in a role in which her demand from a relationship is that both the people in it will be free.