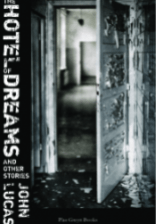 The Hotel of Dreams

John Lucas is a man of many parts – being well-known as a poet, novelist, publisher and literary critic – so it is unsurprising that this collection covers a good deal of ground. Some of the stories have a domestic setting involving both mildly and severely dysfunctional families. Among other things, these stories warn the reader of the divisive nature of conspiracy theories, the risks run by academics who become romantically involved with their students and the potential ruthlessness of “little old ladies”. There are also a couple of enigmatically supernatural stories, one featuring premonition and the other some haunting recollections. Readers familiar with Lucas’s novel The Plotting will not be surprised that there is a well-observed story about small-time jazz musicians. The collection is rounded out with two affectionate character studies set on a small Greek island.

The author’s preface mentions that these stories were written at different times and that some of them first appeared in journals “which have long since gone out of existence”. Notwithstanding their widespread dates of composition, however, the stories are consistent as regards clarity and readability of their prose. Lucas can compose good dialogue and is as comfortable when writing in the role of a detached observer as he is when using the first person narrative voice of one of his protagonists. A particularly good example of the latter is in ‘Riddance’ an atmospheric noir piece about petty crime, which begins

A pleasingly distinctive feature of several of these stories is the way that Lucas introduces works by other writers as triggers or reference points. Thus, ‘A is for …’starts with the narrator coming across a novel by Eric Ambler in a second hand bookshop. Ambler produced a number of espionage thrillers both before and after the second world war and he is now recognized as a very accomplished writer who is, in some ways, a precursor of John Le Carré in his bleak descriptions of intrigue and betrayal. Lucas cleverly weaves together some reflections on popular writers of the 1930s with elements of family memoir and a re-telling of a wartime intelligence coup of misdirection which was described in the 1953 book (and the 1956 film) The Man Who Never Was. The story ‘To Avoid Those Eyes’ consists mostly of an amusing monologue questioning the value of poetry and giving examples of its negative influence on relationships. In the book’s title story, the narrator only begins to understand the erratic behaviour of another character when he recalls a much-loved tale by the Italian author Italo Calvino. Perhaps most cheekily of all, Lucas the literary critic interrupts Lucas the story-teller in the middle of a story about a linoleum factory in the 1950s. Lucas puts the following words into the mouth of one of the characters who is a literature student doing a vacation job.

But let no one suspect that this is a piece of gratuitous point-scoring!  As with the earlier examples, the introduction of Little Dorrit enables Lucas to cite another literary instance which parallels and illuminates the story he is telling.

The Hotel of Dreams is most definitely a good read. And it is one which generously provides links to further reading.