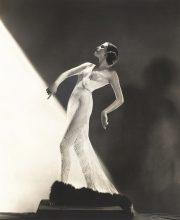 In 1933, Hitler became Chancellor of Germany.  In the world of fashion, shoulders broadened and the iconic 1930s shape became established.

The juxtaposition of fascism and fashion might seem frivolous, but Night and Day is earnest in that it takes style as the lens through which we can understand anew an era impossible to disassociate from the World War that followed.

It was also preceded by the stock market crash of 1929, meaning that looking good night and day was often a triumph of ingenuity over adversity and only the wealthy few could be effortlessly if guiltily elegant.

Even for them, the gaiety of the 1920s flappers gave way to more sedate and chaste cuts, just as in architecture the extravagance of art nouveau had already been pared back to the geometric flair of Art Deco, named after the international exhibition Arts Décoratifs et Industriels Modernes, held in Paris in 1925.

Another piece of style trivia we learn, or possibly are reminded of, is that the discovery of Tutankhamun’s tomb in 1922, when gold discs were found sewn to the young king’s clothing, led to a vogue for sequins and sparkle that endured into the 1930s.

At the dazzling summit of the social pyramid was Princess Elizabeth, captured by Cecil Beaton in a froth of net and diamante, decorously seated in her palace.

For mere mortals, glamour had to be contrived from domestic skills honed from reading women’s magazines, full of helpful tips.  At the same time, department stores were also becoming established, allowing customers to browse unattended through racks of off-the-peg clothes bearing price tags and forcing shop assistants, previously accustomed to the personal service of the tailor-made, into new work practices.  Today’s echo is the growth of online shopping, check-out robots and the collapse of the high street.

The shift away from the chic boutique also coincided with the advent of cheaper, patterned fabrics and synthetic materials rather than the embroidered silks and velvets that had gone before.

They provided the attire for the thousands upon thousands living in the new semi-detached suburban housing that shot up in the 1930s, replacing crumbling slums.

At the other end of the social scale, society photographer Cecil Beaton was signing the lease on his country home in Ashcombe, Wiltshire, where he would entertain his leisured guests and host fancy dress parties.

One of his outfits was a “rabbit coat”, worn at his “fête champêtre” in 1937.  It has been recreated with egg shells and flamboyant felt flowers and guards the entrance – or is it the exit? – to a selection of 30 of Beaton’s 1930s fashion portraits.  The original was made by stage costumier Madame Karinska and had accompanying breeches embroidered with beetles.

Most of the portraits he shot take as their theme the glamorous and make-believe.  They include his famous 1936 photograph of Marlene Dietrich, which captures the strength of her jaw-line, echoed by the brim of her hat and continued by the sweeping gesture of her hands.

We also have a triptych “Charwoman to Dowager” on the art of retouching, showing how he slimmed down and rejuvenated his subject.

The two worlds – glamour and desolation – collide in his portrait of Vicomtesse Marie-Laure de Noailles, artist and patron, as she huddles in her fur coat among the ruins of the Paris Exhibition.

Her sorrowful expression may have been genuine, but is also stylised.  One rare natural-looking shot is of actress, writer, model Iris Tree and another “bright, young thing” Nicolas Nabokov, who holds her tightly while she looks radiantly happy.

They stand out for their apparent disregard of formality in an exhibition that emphasises the pride of overcoming difficulty and keeping up appearances.

Another selection of portraits by Dorothy Wilding, Madame Yevonde and Paul Tanqueray, leading studio photographers in London, provides further testimony to the golden age of the glamour shot.

Vivien Leigh is luminous in a sapphire blue dress offset by a vase of tiger lilies.  Even Washing Day, an advertisement for British Celanese fabrics, is a dreamy haze of soft colours against a summer sky.

Returning to the present, the similarities – and differences – are striking.  Today’s women do not accept that their place is in the home.  Still, however, they emulate the film stars.  The difference now is that they want the brands they wear not makeshift equivalents.  A decade after our own financial crisis, we have lost the 1930s willingness to find satisfaction from cutting our coat according to our cloth.  The nagging sense left by this socially-aware exhibition – from which the evening gowns, plunging at the back, however elegant cannot divert us – is that the divisions between the have and have-nots, borne out in how they dress, are marked today, as they were in the 1930s, and anger is fermenting.