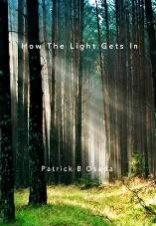 Old and new poems alternate in the selected new poetry collection of Patrick Osada with particular attention being paid to nature, especially plants and birds, and his concerns about the environment, which seems to change too quickly.

The book is divided in three sections, “Nature”, “Place” and “Spiritual”, but the poems are not linked only to one topic: on the contrary, the three themes are often interwoven. The ‘pleasure’ and ‘rapture’ that nature inspires and the poet’s profound love of the environment are reiterated in many pieces. There is an attentive, minute observation of the flying of birds, their migrations, their imperceptible movements and the essence of their singing; all this is captured in elegant lines and evoked in sounds that engage the reader in a multi-sensory experience.

Nature blooms and dies, freezes in white cold nights or bursts in lush vegetation; compelling poetic images reveal a profound communion with the environment. This contact with nature an its rebirth every spring makes being human more ‘human’ and is perhaps the core of our humanity; whereas our spiritual side might be constantly haunted by the end of our physical being. It is a constant effort of renewal where light and shadow take turns in the memories of the loved ones.

The power of spring is revealed in birds’ songs, in the ‘smell of garlic’, and in the relentless blossoming of the blackthorn in spite of winter’s harsh winds. Though winter is fascinating with its ‘icy flowers’ and ‘snowflake petals’, nature is frozen, animals rest and can only ‘dream of spring’.

The flying and singing of birds represent this cyclical renewal at its best, a hymn to hope and life:

In the poem ‘Force of Nature’ the rhythm and sounds reproduce the flying of the starlings in an onomatopoeic evocation where sounds and images create a harmonious riveting effect:

But nature is not only joyful and lively. Death lingers in its folds, present and inevitable in the hawk feeding on a robin, ‘pausing, head cocked, aware of every sound’, or in the crows whose ‘shadows caw across the stubbed field:/Black harbingers who come with tales of death’. Life mingles with death in a natural flowing that does not seem to affect wildlife’s harmony.

In ‘Still life with feathers’ four birds fly from the nest but one is left dead behind in the birdbox where the poet finds it in ‘a filigree of spider’s web’. It is ‘perfect and whole’ in its stillness, a natural death. A similar event is echoed in ‘Still’, in the Spirituality section; it is about a still born child ‘perfect in the deep dark of the scan./ He was complete…an active growing child’. Here the reaction is different, ‘nature seemed to catch her breath’. The death of a child does not seem to be as ‘natural’ as the death of a bird. This suggests that death in nature is part of a cycle while in human life it seems to be a halt that creates confusion. This concept is already introduced in the second section, “Place”, where ‘sea and cloud conjoin’ (‘Roseland’), merging water and sky in a less certain scenario compared to the countryside landscapes:

The word ‘change’ recurs in these poems underlining environmental concerns about people’s unscrupulous destruction of nature, where ‘scaffold poles’ take the place of trees and ‘hard-hatted men with cruel machines/soon make the torn earth die…’ (‘When’). The geese cannot find their place in the countryside where new houses have been built and green spaces are less and less.

Light and shadow alternate in the “Spiritual” section where death lingers in the memories of dead people the poet misses. It is threatening in the dead fox:

The future seems uncertain, the afterlife a question mark, but nature comes again to the rescue. Though people are dead, their gardens bloom in the unbroken cycle of seasons that brings everything ‘back to life’.

The final poems reflect these two moods in striking images. On the one hand, the ‘heart’s red rage’ and ‘the bird of black despair’, on the other hand, ‘the blueness air and water’ and ‘Liquids of air, fused on the mountain top’. The poet carries on, dreaming and praying for peace with the words of an ancient Celtic Benediction (‘Saying Goodbye’), ‘uncertain that my memory serves me well’ (‘Anniversary’). It is an elegy to a loved one, painfully missed, but present. It is a wish to grasp life in memories that are fading but still there. This is an enthralling collection that brings nature and the unpredictability of human life to light.

Mantegna and Bellini, National Gallery. Review by Barbara Lewis. The Hotel of Dreams