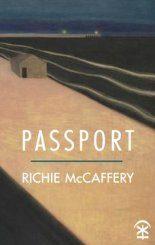 It was one of those ironies that Richie McCaffery would appreciate when, earlier this year, it was announced that the new true blue UK passport would be made by a Franco-Dutch company. The outrage in some quarters of the press was fuelled no doubt by the notion that a passport is a way of asserting identity – a kind of outward and visible sign of who you are. You’d expect it to contain a picture of the bearer, an indication of his or her place of birth, and maybe some visas indicating where they’ve been in the past few years. McCaffery has chosen the title of his second book knowingly. Passport will tell you a good deal about Richie McCaffery himself, though as he says in ‘Nowhere’ he wants to write ‘something that will be / more important than any official document.’

The predominant mode is first person address, the voice McCaffery’s own. The collection has a unifying autobiographical theme, following his move, with his wife Stef, to live in Ghent. The displacement involved in settling in a new country is uncomfortable and useful at the same time. In some ways a poet is always an outsider, an observer – a Martian if you like – often enchanted, sometimes puzzled, posting those messages home. A couple of the poems in Passport do, in fact, have the word ‘Postcard’ in the title and there’s a hint of the Martian in lines such as ‘A crumpled up rejected poem on paper / unfurls in the bin like it’s flowering’ or ‘…the tripod chairs that lurked / in your house as if they’d gnawed / off a fourth leg trying to escape.’

Another literary referent is almost certainly Douglas Dunn’s Terry Street, particularly in the wry sequence of observations that make up ‘Kongostraat’. It’s worth quoting the fourth, closing section in full, for the flavour of its still sad music:

The metaphor of the street lights extends gently here towards the quietus of the conclusion, and that cleverly slipped-in ‘as if we might come in useful’ shows just how precise McCaffery can be without straining a simile. The Belgian location notwithstanding, there’s something very British in his penchant for the understated. The hoarding of things that ‘might come in useful’ is a trait you’d associate with a generation that knew more of post-war austerity than the poet’s own, and the continuity of experience through family is a theme that recurs in Passport, notably in ‘The gifts’ and ‘Breakdown’ both of which deal amongst other things with masculine identity and male anger. What distinguishes these poems, however, is McCaffery’s ironic sense of humour. The opening of ‘Breakdown’ is characteristic:

The choice of ‘bonding’ contrasting with the idea of breakage is playfully set-up and marries nicely with the book’s theme of divided selfhood as it emerges at the end of the piece where the poet is pulling himself apart ‘without knowing / how I can be put back together.’

That familial debt is nicely paid too in ‘Left hand drive’ where the poet experiences the shock of seeing his father’s car parked on a street in Belgium (‘Not his exactly, but the same / colour, model and year’). It takes him back to the times when his father picked him up from school ‘and its bullies’ and the simple clause ‘The car was empty’ echoes his desire to see his father living again with genuine emotional resonance. The ending, which I won’t give away here, clicks perfectly into place with a blend of wit and sorrow that’s something of a McCaffery trade-mark.

‘Kongostraat’ and ‘Left hand drive’ are among four outstanding poems from Passport that appeared in the Magma ‘Europe’ issue earlier this year, and there’s little doubt where McCaffery stands on the great divisive issue of our relationship with what was once known as ‘the Continent’. McCaffery’s own struggle is much more to do with resolving the divisions within himself. The delightfully playful ‘Ish’ squeezes every nuance from the popular qualifier. A student in Scotland who grew up in Northumberland, he feels more Scottish than English.

One of the several talents evident in McCaffery’s first book, Cairn, and developed here, is the ability to discover the numinous in the everyday: a man on his knees, as if in prayer, setting new cobblestones; a library’s pencil-only policy that ensures ‘Anything you do leave will be erased’; a pair of dippers on the banks of the Kelvin that lead, by analogy with a pair of lovers, to the understanding that ‘If we please ourselves first / we stand the best chance of pleasing others.’ The poems in Passport are consistently built around witty apercus that keep the texture light but which hint at deeper significance. The novelty of life in an unfamiliar country provides a glinting vein of material. If you’ve not spent time in Belgium then you probably won’t know that the prices in second-hand books, unlike their English equivalents, appear on the rear end-paper. ‘One wants you to buy the story / on faith, the other on inspection.’ In classrooms of Catholic Belgium, we learn, there is usually a crucifix, though ‘Ours / is broken and lies in bits’ looking like ‘a gun someone / has been ordered to surrender.’ My favourite apparently casual observation occurs at the end of the previously-quoted ‘Double Dutch’, though in this case the incident might just as easily have happened in the UK:

The rhythms here are typically conversational. The penultimate stanza is really there to set up the punch-line. But there’s something in that ‘By instinct or experience’ that lifts it momentarily out of the anecdotal into something altogether more troubling. Why is it we always seem to try the locked door first? Is it some kind of inherent human perversity? And the things we trust in – instinct, experience – are they reliable guides after all?

Now and then, fleetingly, you feel the poet’s search for significance in the ordinary may have willed a poem that isn’t quite realisable. In ‘Light’ for example McCaffery pictures himself absent-mindedly switching on a light, feeling the need for more – and clicking the same switch which plunges him back into darkness… Well, many of us do such things when we’re preoccupied. Maybe it’s just that I’m missing the point in its conclusion: ‘In the dark, shocked awake / I realise it wasn’t enough.’

That said, Passport remains a hugely entertaining and engaging second volume from a poet whose heart is generous and whose wits are sharp.