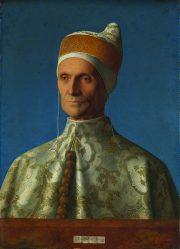 Regardless of the emotional success of the marriage, for art historians, the far more important relationship is of two brothers-in-art, who spurred each other on, often treating identical subjects, learning from each other and drifting further apart as their styles matured.

Fifteenth-century art works are fragile and difficult to transport, meaning the National Gallery’s justly lauded assemblage of works from as far away as Brazil is a rare chance to study and marvel at the extraordinary similarities and differences between two of the greatest Italian Renaissance artists.

Mantegna is the more cerebral.  Inspired by architecture and antiquity, his trademark is a dramatic use of “scorcio,” or foreshortening, that brings us up close to the agonies suffered by Christ, rather than allowing us the emotional distance of gazing up at a lofty figure.

Bellini’s great strengths create a different kind of immediacy.  They include a powerful use of colour, the creation of atmospheric landscapes, steeped with emotion, and the portrayal of faces that seem to live and breathe.  A true Venetian, he infused his works with light.

We begin with St Jerome in the desert, in the wilderness and with a lion.

Mantegna’s St Jerome Penitent in the Desert, loaned from the Sao Paulo Museum of Art, cuts a frail, lonely figure, surrounded by symbolic items with a rather doleful lion at his feet as tame as a dog.

Bellini’s St Jerome and the Lion zooms in on the interaction between the lion with a thorn in his paw and an animated St Jerome in an almost pastoral landscape.

The two painters again differ over treatment of Christ’s descent into limbo.  On this occasion it’s arguably Mantegna who focuses more narrowly on the dramatic action as Christ disappears into the earth.  Bellini’s descent is embellished with Bosch-like half-serpent, half-fish monsters.

Both versions share a similar figure in the foreground with flowing robes, perfected in a surviving studio drawing also shown at the National Gallery.

The technical virtuosity and emotional authenticity of Mantegna and Bellini are all the more vivid when compared with their contemporaries.

Marco Zoppo was inspired by Bellini, but his dead Christ with angels lacks the physicality and depth of human suffering of Bellini’s interpretation, while Mantegna gives us more context and more symbolism: a looming sky, a landscape where life goes on indifferent to the agony and an antique-looking tomb.

Perhaps the most striking example of similarity and difference is the Agony in the Garden.  Bellini’s depiction sweeps away Mantegna’s architectural detail, background figures and a vulture of doom in a tree to portray a kneeling Christ dominating a landscape with little to detract from him and the firmament where an angel of hope awaits.

By the time we move on to the later years, for the most part the subject matter on display from the two artists is different.

Mantegna’s fascination with antiquity reaches its acme in his great nine-panel The Triumphs of Caesar painted during his time in the employ of the Gonzaga family in Mantua for their ducal palace and now part of the Royal Collection at Hampton Court Palace after Charles I acquired the work in 1629.

Bellini remained in Republican Venice, where he brought his powers of capturing human character to a portrait of the blue-eyed Doge Leonardo Loredan, all-powerful and inscrutable in exquisitely embroidered silk.

Mantegna’s Cardinal Ludovico Trevisan demonstrates comparable skill in his depiction of the translucent folds of the cardinal’s surplice, but if the doge’s clear stare is modern, the cardinal is stern and classical, like the characters who people Mantegna’s Triumphs of Caesar.

Equally, Mantegna’s Virgin and Child is a perfectly crafted study in quiet, protective tenderness and bonding down to the child’s tiny clenched hands.  It is heart-breakingly beautiful and artistically brilliant, but it’s Bellini’s boldly colourful and more fluid Virgin and Child that looks ahead to the great blossoming of Renaissance art that was still to come.