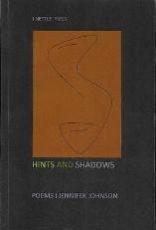 Many of the poems in this collection give remarkably frank and three-dimensional accounts of harrowing experiences . This seems rather at variance with the book’s title Hints and Shadows which might lead us to expect something more understated. (There is of course a valid reason for the book’s title and we shall come to that in due time.) But for the moment let us consider the harrowing experiences. It can be a mistake to assume that any poem which uses the word ‘I’ is in fact autobiographical; but some of the circumstances in the poems do correspond quite well to the author’s biography given on the back of the book. Without going beyond this observation, I will say that the collection, which traces the trajectory of a life from childhood to middle age, does feature a poetic persona who is prepared to be remarkably self-revealing.

Many of the glimpses of childhood are distressing in a matter-of-fact sort of way.

Note the careful us of a double past tense in that third line: the studied neglect persists even when the child’s life is apparently no longer at risk. Unsurprisingly then we learn that the mother “liked her children resilient.” And we get a sense of a claustrophobic home where net curtains

We are even told of events that sound very much like abuse:

And yet, with hindsight, there comes an almost wry detachment. Much of the narrator’s childhood was spent in Africa. Many years later “Google Earth lets me fly over my birthplace” and the internet also gives access to the places where her father worked as a lecturer.

Such a neat break in that first line! Hindsight also allows the examination of incidents that were inexplicable at the time.

But the narrator’s final objective summing up of her early years remains bleak.

Eventually the poet comes back to England, English schools and university. But this is followed by her return to Africa as an aid worker in Zambia. Candidates for these posts were sorted

“We put ourselves / into the first category,” declares the narrator; but what transpires when the posting is over is the discovery that

Worse still “Even the English we spoke / was incomprehensible / on our return.”

From this point onwards the poems are mainly about adjustments to life in Britain – a country which is not always viewed with affection. And awareness of Colonial life is rarely far away

Coming to terms with life in England is not made to seem easy. An important date was “when I stopped hiding / in my lonely, tidy room.” Relationships are evidently made but then broken. The poet speaks of missing someone un-named friend and “the room / you allowed me / to stretch out in” and longs to talk to him again because he “already knows / the pictures / I would like to put / on my walls.” There are almost brutal confessions of low self-esteem “Today I feel like a man in drag”. And there is a vivid account of being caught up in a terrorist incident. Many of the poems, as the preceding extracts show, are constructed from short, factual and quite staccato lines which are well suited to the purpose of focussing the reader’s attention on the story being told. But Johnson is perfectly capable of more imaginative language and scene setting. She observes how “gold-chained youngsters / use phones like life-support.” She values “places that are special to me” and in a delightful twist on a usual way of looking at things she praises them for having “given wear / to the soles of my shoes.”

The poem ‘Perception’ is the one which gives the book its title – I said we would come back to this! – by virtue of its epigraph The reader reads that which writing suggests in hints and shadows, a translation of words by Alhazen, an 11th century scholar from Basra. It explores the differences between perceiving and merely seeing and is perhaps intended as advice to the present reader to be prepared to look below the surface narratives of the poems. The poet tells us

How sour that last line sounds these days when there is so much optimistic talk in some quarters of Britain forging new treaties across the world! Worse, the poem reminds us that even more recently the Western powers

Given that the poems have presented so many stressful incidents it is no surprise that any moments of peace and beauty are treasured. The poet dreams of watching boats on the river and being able to “see the wake disrupt / the water’s reflection” and then – most importantly – to “have time to wait for the pictures / to become whole again.” On a Sunday walk she observes gratefully, even if a little regretfully, that “trees seem more forgiving / than people often do.” But in the end it is reassuring to find that one of the last poems in the collection is entitled ‘Good to return’ and it suggests that the narrator has at last found a place of rest and contentment which admits such simple pleasures as watching a neighbour’s cat “balance on a rickety fence / without a care in his whiskers.”

Many poets seem to strive for many collections, each one breaking new ground in terms of theme and style. It is possible to imagine, however, that Johnson has spent her whole poetic life (so far!) painstakingly working towards this one book. (And it is not a short boo: a generous 100 pages for the price of a pamphlet!) The acknowledgements section shows that the poems have gained an impressive number prizes and commendations alongside numerous magazine and anthology appearances. It will be interesting to see where her inspiration begins to take her when she next opens up her writing case and sees her “pencils sharpened / like teeth searching for words / able to form sentences / that cast the spell of diamonds.”