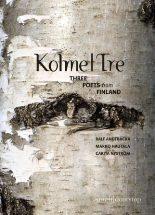 Of these three poets from Finland, only one, Marko Hautala, writes in Finnish – a language that belongs to the small Finno-Ugric group, whose grammar, vocabulary and rhythms are very different from those of most other European languages. (Indeed, to outsiders a Finnish text appears a jumble of letters, with an inexplicable preponderance of vowels, some of whose words seem to go on for ever.) Ralf Andtbacka and Carita Nyström, both from the district of Ostobothnia, write in the more familiar Swedish language. (In both cases, the text provides the Swedish original of one of their poems, though not for some reason the Finnish original of any of Hautala’s.) The anthology, according to the blurb, is supposed to celebrate “poetry as an international language”. The problem is that poetry isn’t an international language – poems are written in a particular language, whose specific sound-qualities, rhythms, and idioms may or may not survive translation into another. Here the poets present themselves in English: they are being treated as, in effect, English-language poets despite their Finnish provenance.

Andtbacka can write straightforwardly about the Finnish landscape, its forests, lakes, and islands – “One drowsy day in August we rowed out on the bay, / first through the canal and then along the dredged channel” – but it is in the interest of finding there something that is not straightforward. In this poem (‘Tout le monde est triste’) the narrator’s friend tells him about an old bull elk. It seems, however, that the friend is lying: there is no such animal. Nevertheless, on rowing back, the two men ‘listened to the dip of the oars, / both of us thinking / about elks swimming.” The poem ends on an enigmatic note, as if there is something that is being withheld, as if only so much can be revealed in a single poem. In ‘Last Days of the Rainy Kingdom’ the king’s scribe, “his face blurred / as the writing on the softened scroll”, declares “I only wish there was no time / to mourn this sweet but decaying kingdom.” This is indeed a mournful poem, but Andtbacka is a scarcely a sort of Finnish Tennyson. ‘Little Hammer’ is closer to what we usually think of as realism: there is a factory gate and someone (the narrator) waiting for a girl to come out. True, he has for some reason a “Hello Kitty band-aid slapped on the bridge of [his] nose” and his “jacket bleeds feathers”, and the girl in question is not described with an excess of sympathy: “the Queen of Greasy Hair emerges, / wearing the same drab coat she always wears”. But nonetheless “The pavement smoulders where she walks.” Other poems seem too enigmatic for their own good. I can understand (almost) that “a forest without trees is not a pretty sight” but not why “a mouth without a smile” should be “like a leaf”. In the twelve poems given us here there is much to intrigue, but taken together they don’t display a single coherent individual voice: we would have been better served by a larger selection that might allow us better to see quite where he is coming from.

Carita Nyströ is the senior and best-established poet here, but she is the one with whose work I had most problems. The ending of ‘Loss’ is a case in point. The lines “Approaching the forest / tears fill my eyes” is surely ungrammatical, and to finish with the bare “I turn / and walk home” risks bathos. In ‘In the Archipelago’ she asks “Did Icarus fly here, / lifted out of the labyrinth? / Is this where he fell?” To which we are tempted to bluntly answer ‘No’ – or, more graciously, that we are given no reason to suppose so. The ending of ‘The Labyrinth’ – “My grief soars like an eagle / over ancient rocks” – has an unwelcome touch of the grandiose. Even in ‘Solovetskiy’ – where a monastery served as Tsarist prison, then Soviet labour-camp – are we not being told too insistently how we should feel? The ending is more effective in its quiet restraint:

It must be said, however, that her poems in English are too often on the verge of being banal: no doubt she writes to greater effect in her native Swedish.

In the work of Marko Hautala, now primarily a novelist, there is a strong awareness of life’s absurdities as well as its tragedies. In a poem called simply ‘A Poem’ he plays with the notion of verisimilitude, admitting that he “changed some details / And added a bald hitchhiker by the name Auguste Dupin / So you would think it’s a poem not a joke.” Jokes, he tells us, “are not appropriate, the world being what it is.” The incident recounted is an improbable one: as driver of the van and hitchhiker talk “About the rain and receding hairlines” a monkey in a red dress appears and performs a striptease. The final lines return us, with a jolt, into reality (or something like it): “On the way to Punkalaidun we stopped at a gas station for a coffee. / Are you crying? the lady asked.” In ‘Nonsense’ he meditates on how the ancient Egyptians flourished, or maybe just “thrived more or less”, despite what one might have thought a disabling preoccupation with the afterlife. He tells us that in the tomb of Rameses the Third there is a passageway descending from the main vault but leading to nothing. It had “No purpose” but was “a passage into the nonsense / That somehow made it all work.” In ‘The Birth of Frost’ he recalls an incident from childhood, when walking across the fields with his father: “There will be a frost tonight, he said. The stars are bright.” The child misunderstands, the father in the end gives up:

It is a simple poem, but has a resonance that goes well beyond the particular incident recorded. For all that he turns his back on lyricism, and relies for the most part on dry statement, Hautala has a rare capacity to make us laugh as well as feel and think.