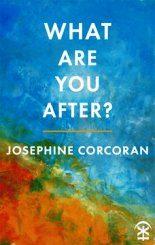 Josephine Corcoran draws on both personal and political experiences in What Are You After? which widens both the scope and interest in the poems. She starts from the personal, a group of early poems written in response to miscarrying twins. ‘Supermoon, September 2014’ imagines those twins as teenagers,

The poem explores loss from two angles: that of the parents who have lost children and the ghostly children who have lost parents with the hope that safety resides in numbers. ‘Mis/Carriage’ is more direct, the prose spaced to give the poem a box-like appearance

It creates the sense of a speaker trapped in defining themselves as a non-parent, ruminating over the physical loss and transition from pregnant to not-pregnant and also the emotional and psychological loss of what those children could have been and the imagined life that now won’t happen. The narrator is using words to try to convey something that needs more than words.

Parenthood and how to rise and teach children is touched on in ‘Stephen Lawrence isn’t on the national curriculum’. Stephen Lawrence was a black teenager stabbed by a white gang in South London,

Colonialism is often taught as something that happened ‘over there [in America]’ as if there were no ramifications for Britain. This failure leaves British children ignorant of their own history and, unable to put racial tensions and privilege into context; hence they risk having a lack of humanity and compassion for their own peers. Contemporary knife-crime in London shows lessons haven’t been learnt. The poem shows what is lost: one young man and his dreams, who could have been any young man and his dreams. His loss is our loss.

‘Poem in which we hear the word ‘drone’’ considers associations,

The poem spills over the page as if it is a loose gathering of random thoughts but it is actually a controlled guide though a loss of innocence. The initial association with nature becomes a more sinister one with terrorism so the connections grow to include menace. The domestic scene of ‘a table, soup’ suggests that readers can’t brush off this threat as something that happens elsewhere; it’s a threat that affects us too.

Josephine Corcoran’s poems are inventive and visceral, provoking readers into considering their values and morality. She is equally adept when writing from personal experience or imagining herself in someone else’s life. She lifts a compassionate mirror to our world.