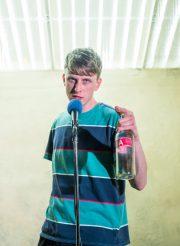 The End of Eddy

Eddy Bellegueule, now renamed Edouard Louis, grew up in a household with four televisions that were always on.

For the young Eddy it was the hellish backdrop to a childhood with no happy memories.

Equally appropriately, the cast comprises not one put two Eddies (Alex Austin and Kwaku Mills), representing the ridiculously named Eddy Bellegueule – “quite a surname,” as the two Eddies tell us, literally translated as beautiful gob and slang for tough guy – and Edouard Louis, the adult who emerges from the chrysalis of Bellegueule.

Both actors win us from the start with humanity and humour that make the evening enjoyable, but take us a comic step away from the real suffering of the book and the tragedy of the emotional numbness of much of Bellegueule’s childhood.  The production resists sentimentality, but the laughter generates warmth Eddy’s upbringing lacked.

In other ways, the production is almost too literal, although doubtless a dream for exam students in need of the clearest possible explanation of a text.

“Suffering is totalitarian,” is repeatedly explained.  “Anything that does not fit into the system is made to disappear.”

At the same time, the themes of violence, shame, pride appear on the screens like revision flash cards.

One departure from the book is the transposing of an account of the mysterious period of Eddy’s father’s youth away from the village of Hallencourt into the car journey that marks the start of Eddy’s journey into his new life.

After that, we have a wild rendition of a Celine Dion song, one of the young Eddy’s favourites.  Then the actors take up the book, pages marked with post-it notes, and read from the final chapter, ordering us back to the text and then maybe on to read the sequels of Edouard Louis’ heroic and grimly fascinating life. 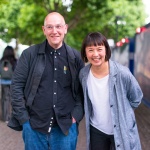