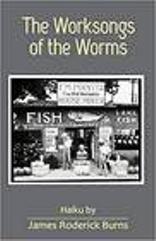 This book gets its unusual title from a poem by an 19th century haiku composer who took the pen name Issa: “The old dog listens / intently, as if to / the worksongs of the worms” This, rather charmingly, encourages us both to speculate on what dogs actually do listen to / think about and also to wonder whether worms do indeed have a language or a capacity for their own kind of music. James Roderick Burns is evidently inspired by this example to compose his own haiku which similarly  invite readers to embark on more or less serious meditations.

Each of the 88 haiku on this collection sits squarely in the middle of a page refusing to be daunted by the white space around it and challenging the reader to take it seriously. Size, after all, is not everything! Furthermore, each poem also asserts its individuality and few – if any – stick to the “standard” 5-7-5 syllable recipe so often adopted for Western haiku. As a consequence I felt obliged to adopt a disciplined and respectful manner of reading. This involved a conscious determination to remain still and let the poem’s “small machine” (as William Carlos Williams has put it) do its work of conveying a mood or image or of raising associations and questions. A substantial train or bus journey might offer a good environment for this, since one expects to be sedentary for a while and is perhaps less susceptible to interruptions and distractions that might tempt one at home.

It was as a matter of fact on a District line journey to Wimbledon that I put this reading strategy to the test. The results I outline below are of course entirely personal but they are intended to give a sense of just how much potential is stored in the best of these little poems.

The book opens with

Here one might too-quickly suspect something of a cliché – an encouragement to positive thinking inspired by the resilience of the crocus stem. But that cliché would more conventionally come “after a thaw” with recovery being possible because reassuring warmth has removed a cold and prolonged burden. Burns has however placed the recovery “after a storm” which (as well as sounding well against “stem”) might suggest that a bigger disturbance, worse than the original snowfall, can also be a precursor to the crocus standing tall again. Of course, the poet may have had something else in mind; but does that matter?

The second poem “Chimney stacks – / even a sliver of sun / is enough” raises (for me) the question of what is that sliver of sun enough for? Is even the smallest amount of sunlight sufficient to relieve the sootiness of the stacks or to render interesting the ragged pointing of their brickwork? Perhaps Burns is thinking of a halo effect from a partially-hidden low sun. Perhaps he is picturing a chimney with a shiny revolving cowling on whose vanes the sunlight dances. The real point is surely that the poem itself is enough to conjure any number of possible chimneys that have some personal and significant association for the reader.

More abstruse, but still enjoyable, speculations may be induced by

Are these degrees of inclination or temperature? Is this about a jar remaining balanced at an unstable angle on a crowded shelf? Or a poetic comment on the condiment’s viscosity?

Other poems work in a less questioning or exploratory manner and are genuinely delightful and fresh ways of describing something familiar. “As you depart / haloes of moisture / reclaim your footsteps” vividly but economically evokes the trail we leave by crossing the early morning dew on a grass verge. Even more imaginative and satisfyingly accurate is

Birds appear quite frequently in this collection and can bring out the best of Burns’ craft:

is a compact description of a charming case of mistaken identity ; and

has something of Disney about it.

The brevity of the poems should not tempt us to read them carelessly. “Old man / finds his shoe / on the corner” does not refer to a senior citizen looking for his footwear in an untidy bedroom. It is not “in” the corner but “on” the corner – presumably of a street – and this invites us to supply a more complicated and interesting back story. The degree of attention that these haiku require is something that should appeal to the owner of the pedantic voice which observes “E-book – / lost apostrophes / loud as thudding feet”. (And how satisfying it is to say that second line out loud!)

I hope I have conveyed something of the pleasure to be had by dipping into and savouring these well-made little poems. I conclude with a particularly delightful example of a political haiku – not, I believe, a very common genre. “Spring budget – / driving sleet, cat slipping / through a fence” is a splendid and witty capturing of the cold wind of austerity and the sleek and elusive subterfuge of any Chancellor of the Exchequer you might care to name.