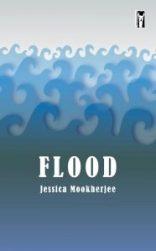 This is a book of ferocious imaginings, which builds on two earlier pamphlet collections. Good to see that so-called smaller presses are continuing the valuable work of bringing newer voices to the attention of the reading public. Many first full collections are, in effect, a Selected Earlier Poems, and the range and variety of work offered here suggests that Flood is no different.

The book is in four sections, Churn, Flow, Break, and Surge, with the title poem closing the book, although the word ‘flood’ occurs in the opening poem, ‘The Flesh Leaves’. We then move on to ‘1967’ a short poem about an arranged marriage, presumably between Mookherjee’s parents. It starts

shows us the iconography of Indian sub-continent weddings, and finishes

This is a book of strong emotions and troubled relationships. ‘The Milk’ appears to show the poet’s childhood and schooling in Wales, starting

Given that we may yet again be in the company of the Unreliable Narrator, these poems of a bi-cultural heritage, upbringing in Wales, and later life in north London, may well be the poet’s own personal experiences, but we read them as powerful and informative pieces without treating them as Confessional. In ‘The English Girl’ we are taken on a trip to a family or ancestral home in Bangla Desh, where the first stanza reads

In the last stanza we learn that her Grandmother

So this child, who was born in Wales, is called both English and British. I suppose from a Welsh viewpoint, British, or Brythonic, is at least partly right. ‘The Child’ is one of a number of poems that move away from the purely personal, and appears to be a version of the Little Red Riding Hood story, since it is done in the persona of someone with a ‘big hairy hand’. ‘Goat-Father is an exchange between a young person who asks ‘Well what about Pan? to be told

Hardly surprising then, that ‘Scars’ relates what I hope was a teenage experience of a first cigarette, and possibly first sexual encounter.

In ‘Dawn Chorus’, the narrator is seventeen, while in ‘Hungry Ghosts’ we are introduced to someone who might be the same character, self-harming.

In the next section, Flow, we find Middle Eastern mythology in ‘Desert Gods’, then in ‘Walkabout. a sixteen year old hitchhiking to Somewhere, or running away from home, and being left at the A66 junction in, I believe, Yorkshire. By the time we reach ‘Wildlife’ we are in north London, in South Tottenham, Manor House and Finsbury Park, among other locations. This poem features characters enjoying this lifestyle

This poem, which could be an excerpt from a contemporary crime novel, does not, of course, have a happy ending. Other poems such as ‘Growing Up in Nightclubs’ , ‘Full Moon Over Finsbury Park ‘ and ‘House on Fire’ also evoke a certain lifestyle prevalent in north London in the early 1990s.

In section three, Break, we are back in mythological territory with ‘The River God’ where the Thames is apostrophised as ‘Tamas / the dark man’ and the poem finishes

In ‘Your Lost Mother’, we have moved on, to

Our narrator – assuming it is the same person as in other poems – now has a new life and a proper job. ‘Seder’ might show us part of this life, where a healthcare professional learns about the lives of Holocaust survivors, while ‘The Safe House’ appears to deal with someone from the past,

‘Having My Sister for Dinner’ is a title that recalls Hannibal Lector’s comment that he is having a friend for dinner, but the poem is, I think, an attempt at reconciliation between siblings who are estranged, or have just lost contact with each other – something hardly surprising if we look back to ‘Wildlife’!

In section four, Surge, we start with ‘Before the Rut’, a piece that could almost be a parody of Jilly Cooper, while ‘Bau’ footnoted as the Sumerian Dog Goddess of Fertility, is a powerful piece of writing that turns the notion of ‘love poem ‘ inside out, and finishes

‘The Return’ appears to be in two voices, one ’I’ and the other ’She’ inset slightly, perhaps two sides of a contested narrative,

In ‘Reunion’ we are taken back to the Miner’s Strike of 1984, and two people recalling a shared history,

The book closes, as mentioned earlier, with the title poem, ‘Flood’, which I would say, deals with music, language and creativity, and starts

Now that is certainly a note on which to finish your first book. Whether Mookherjee’s cage owes anything Plato’s cave, an allegory of how knowledge leads to freedom, I cannot say; but the trope of a broken cage, and the flood of music and creativity being released is powerful.

As usual, a note on the book’s production values is appropriate; the typeface is large enough to be easily readable, although one poem, ‘The Thirst’ was printed sideways to accommodate the longer line employed in this poem. There were however eight or so typos which should have been corrected before the book went to print, and it is to be hoped that these will be amended if the book is reprinted. If this seems an ungracious note to end on, it is only because your reviewer enjoyed reading this book, and having heard the poet read and discuss her poems, she does not seem the sort of person to tolerate sloppy work.