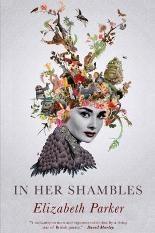 Its title notwithstanding, Elizabeth Parker’s new collection is far from being shambolic, observes Wendy Klein

Of Elizabeth Parker’s debut collection, Martin Malone, former editor of The Interpreter’s House comments that, “she has a canny way with the repeated phrase and a technical control that’s impressive yet lightly worn.” Reviewing this collection for Wales Arts Review, Sophie Baggot describes it as “an ode to women’s togetherness in every sense,” but in conclusion comments that while she wasn’t “wowed” by every page, the poems dazzled enough to “emit an exceedingly warm glow.” Both reviewers have touched upon areas I would like to expand on further here.

From the opening poem (‘Crockery’), it is evident that the reader is in the hands of a highly skilled wordsmith. In only ten lines, which I guess to be about a lover’s departure, arresting images leap off the pages: “your index finger a pink glow in the saltcellar’s skirt”, “The wine glass has peeled a crescent from your mouth”, “…I watch your coffee ripple / when you knock the table with a knee.” In the second poem, ‘Clasp’, the protagonist

Such a knock-out image of garlic, bracketed by good verbs, another facet of Parker’s writing. In ‘White Vase’:

And even more striking, in ‘Rivers’:

Sophie Baggot’s description of this collection as an ode to women is corroborated by Parker’s moving pieces about the fate of Lavinia as portrayed in Shakespeare’s Titus Andronicus. She is raped, then has her hands cut off and her tongue cut, ensuring she has no means of revealing the identity of her assailants. Parker’s version unfolds through three short poems relating the poet’s response to reading about the sorry heroine and seeing the play performed with different men at different times: ‘I. John’, ‘II. Neil’ and ‘III. Paul’, followed by an unbearably poignant 12-line piece, ‘Their Names’, which details Lavinia’s attempts to write and speak without her hands or tongue, her efforts erased as the sea ‘silenced’ the sand. The sequence is craftily interrupted by a poem simply titled ’Hands’, which does not appear to relate to Lavinia at all, apart from referencing hands. Twelve pages later, when the reader thinks that the poet has abandoned Lavinia, she reappears in ‘Lavinia Writes’. With meticulous imagery, Parker describes the process by which her subject is enabled to write her story in blood:

and once again, terrific choice of verbs: dipped, strummed, picked.

In further service to abused women in history, Parker revives the story of Dante Gabriel Rossetti who buried the only volume of his poems with his wife Lizzie Siddal’s body, later paying to have her body exhumed so he could edit his work and re-publish. This is possibly my favourite poem in the collection for the way in which she compares the contemporary techniques involved in word processing with the editing process undertaken by Rossetti to restore his poems:

As reviewer Martin Malone comments, Elizabeth Parker makes clever use of ‘repeated phrase,’ immediately evident in the final poem of the Lavinia set where she restores Lavinia’s ability to communicate. The first line of each stanza begins with intent as the tongue-less, hand-less maiden insists on writing her story in blood:

She takes a similar approach with list poems where she uses a string of images to create characterisation. In ‘Rescues’, a touching ‘father’ poem, she uses a sequence of carefully selected images from nature which reveal the father’s skill in freeing trapped creatures: birds, a fallow doe, ‘caught in a boundary fence, fetlock trapped in the top-straining wires’, ‘barely-there weight of a pipistrelle / he scooped from the outdoor loo’, ‘House martin chicks fledging early / from the mud bowl of the nest’, and most strikingly original:

There is technical control evident throughout Parker’s poems, though in some of the longer pieces, I sometimes had a sense of a device being over used. In ‘Manus’ (Latin for ‘a hand), the poet begins with a quote from the journal of anatomy proposing that “the hominid lineage’ began when chimpanzees started to throw rocks as weapons. The poem sets out as a narrative in which the poet-observer is reading the newspaper and watching her lover play the piano. Nearly three pages long, it consists of the musings of the observer alternated with anatomical quotations to do with the functioning of hand/hands, finishing with:

There is deftness in the way in which Parker blends the anatomy of hands with their sensuality in love-making, but the stacking of images, in my view, could have done with some editing. Indeed, a more successful ‘piano’ poem, titled ‘Piano’, is a spikey piece, terse and to-the-point, which deals with the familiar pattern in which children are offered piano lessons, but never ‘keep it up.’

When the pupils lose interest, the piano becomes a sort of ‘being’ in itself.

Apt and original; we have all seen these gap-toothed pianos.

In summary In her Shambles is anything but shambolic. It has a satisfying complexity, which is rewarded by a second or third reading. Portraits, conversations, love poems and nature pieces are executed with skill and delicacy, often through a combination of repetition and a build-up of images. This works best for me when a narrative emerges. On the few occasions where it does not, my impression is of a sequence of images beautifully crafted, but somehow unrealised. Nonetheless, layered with history, legend, and stitched together with rich and original vocabulary, it is a praise-worthy debut collection.