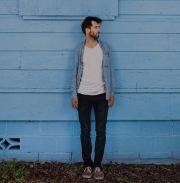 I had the great pleasure of meeting Hugh Coltman during the Marciac Jazz festival in the South West of France at the end of July.

Born in the West Country, close to Bristol, Hugh Coltman has been living in Paris since 2000.  I had seen him perform in 2016, and was interested that he sings in English.  Going by the enthusiastic reception he received from a French audience, the language did not appear to be a problem.  He has now a solid following in France, which is not matched by a similar success in Great Britain.  When we talked about this he explained that the British Jazz scene is very different.  Jazz in France has a much greater following; there are multiple jazz festivals, a huge range of jazz venues and it is a more significant part of the musical scene. That said, he also expressed a wish to sing to more Anglophone audiences and, seeing the subtleties of many of his lyrics, I could understand that desire.  His French is good, he can and does sing in the language, but that is different from expressing complex thoughts in what is not your mother tongue.

What stands out about him is his enthusiasm; he is open, easy to talk to, he is curious, ready to explore.  Looking at his musical history he has not been constrained by any one style, he has experimented with a number of musical genres: Blues, Rock, Funk, Jazz.

We talked about two of his albums, ‘Shadows’ – his interpretation of Nat King Cole songs – and ‘Who’s Happy?’ which he recorded in New Orleans in April 2018, all but one track his own compositions.

There is an intensity and thoughtfulness about Coltman.  When he recorded ‘Shadows’, part of his aim was to highlight the racism Nat King Cole confronted throughout his career.  He had listened to King Cole as a child, since his mother was a fan, but he only became aware of the other elements of Cole’s career at a later stage.  The burning cross that appeared on his lawn in Los Angeles, the hotel that would book him to sing, but would not serve him.  Coltman’s voice, at times edgy, at times plaintive, brings out the subtleties of the story he is trying to tell, an underlying melancholy reflected in the name of the album.

With his latest album ‘Who’s Happy?’ he covers a range of styles and topics, from Trump’s America to a gentle song for his son ‘Little Big Man’. While he pays tribute to the sounds and instruments of New Orleans Jazz, he is in no way a slave to its traditions.  The album is clearly very personal, and what is impressive is how he uses his voice to express a number of emotions, whether contemplative ballads or bluesy rock.

He talked about the importance of his musicians, how crucial it was to fuse as a group and how much he learns from them.  When I saw his set later, that sense of belonging was evident; he was by no means ‘the star’, they all shared the stage in a real sense, and his energy and enjoyment were transmitted to everyone, both musicians and audience.  He is a real performer, he moves, he lets his voice soar, he involves you.  I was amused later to see one of the French reviews describe him as a ‘crooner’.  Perhaps this again is a subtlety of language.  To me the word evokes a cool elegant controlled singer, a world away from Coltman’s dynamism.

On the 19th of September he may further open the door to the British Jazz scene.  He is booked to play at Ronnie Scott’s in London.  I’m going, why don’t you?