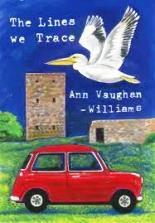 The Lines We Trace is a pictorial autobiography in short verse – forty-seven poems that progress through a lifetime of memories from a brightly-lit African childhood to the mists of East Anglian grandparenthood. As a collection, the poems possess delicate internal thematic echoes, the poet meditating on the soil beneath her, the flow of water in rivers and waterfalls and observing the position of people in place and season as the generations of her family grow pass through their own ages.

Vaughan-Williams’ subjects are her experiences, so there is a diversity within the poems, including sketched word-portraits, mediations, brief adventures, fantasies and reminiscences, but the perspective remains almost entirely personal and at times I find the language unadventurous. She succeeds best when reflecting on relationships in a freely whimsical manner

The collection begins with a series of poems grown from childhood memories. The gentle rhythm of ‘My Ayah’ is a delicate result of the simplicity of stripped-back words, where she finds the metaphor of the ‘lines we trace’ in the palms of her ayah’s hands. ‘Breast-feeding’ contains pigs, sisters and a rich child’s perspective intimated behind a few crisp thoughts. The juxtaposition of ‘Mirroring’ and ‘Linette’ allows a clever transition from baby to doll, providing a miniature shock when ‘the limbs snap off’ and Vaughan-Williams reveals her admiration for her stubborn doll – which seems a key to the poet’s character. She remains determined to appreciate and to interrogate.

The dreamlike ‘Cornish Mermaid’ stands out as possessing mystery and colour – perhaps because, while seeming to be based on a memory, it has a more fantastic quality. ‘Innana and Ereshkigal’ also deserves a mention as a longer piece and a sustained departure from the prevailing tone of the collection. Retelling the Sumerian myth, it mixes intensely physical language with a musical, open rhythm. The exotic names and jewels jar slightly with some of the very English natural landscape that is invoked, but overall there is a liveliness and drama in this that contrasts strongly with the meditative tone of the immediately preceding pieces.

I enjoyed ‘The Load’, which matches a domestic metaphor to the domestic sorrow of missing a loved one. There is a sincerity and genuineness in the way the poet writes ‘I have my heap here to sift in grief’ and she records such moments of memory as when the washing machine begins ‘to tumble a load of your life’. The poet is just as successful in expressing the panic and helplessness of a medical examination in ‘Strange Practices’, with its uneven rhythms and wild questions.

Family remains one of Vaughan-Williams’ pre-occupations throughout and in ‘Catching grief’ there is an ominous, mysterious reflection on the death of the poet’s father, like a meteor or perhaps a bomb falling into an orchard, sudden and heavy, the seeds of new apple trees mingled with the ‘cratering’ of a shocking event. Also mixed in is the recognition of the timeless natural cycle of generational progression, as certain as the ‘sun… mellowing old buildings’. Even when the subject of the poetry moves into grandparenthood, the ‘child who fills my head’ is always present, whether in the children the poet observes or within her own psyche, and this means that she retains a constant innocence throughout her work.

The ‘Journey Round My Daughter’s Room’ is almost found poetry, listing and sifting words from possessions, switching, line by line, between a bemused mother’s perspective and a sassy, confident student. The poet’s observational accuracy in recording the relationship reminds me of the way she notes, in ‘The Front Gardens’, that the planting of flowers allows ‘the wheels of neighbourliness to be oiled’. Vaughan-Williams is another poet to be valued for the pertinacity of her perceptions, certainly, as well for the gentle tone of her verse.

Throughout these pieces, the poet relies on the rhythm of the sentence to provide her verse with structure, rarely accentuating it with more than an expanded phrase to lengthen a line. A few of the poems might have profited from taking on a stronger verse form and – apart from the few formal contrasts I’ve noted – there are no great shocks or surprises awaiting the reader. Yet what there is here is sincere, innocent, thoughtful and honouring. People, places and memories are each valued and treasured. Nothing is found unworthy of interest or appreciation.