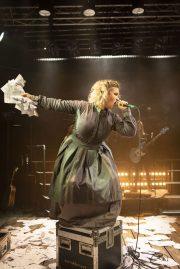 In our blasé age, we may take for granted that a remote Yorkshire parsonage managed to produce three sisters who defied rigid Victorian convention to give voice to raw passions and sexual frustration no respectable woman was meant to feel.

The comparison or, as the Bronte sisters might say, extended metaphor this production draws between the emotional ferocity of Charlotte, Emily and Anne and their brother Branwell and the adolescent rebellion of a heavy rock band is at times taken several decibels too far.

But the overall result, despite the dark melancholy and a penultimate song entitled “Everybody Dies”, is funny, life-affirming, wildly exhilarating and succeeds in making us re-live the Brontes’ fervent ambition to avoid wasting their lives.

Natasha Barnes as Charlotte is the anchor of the production and of the family.  She comes across as the most normal, the most realistic and a bridge to any moderate members of the audience.

The more extreme siblings are Branwell, played with swagger by Matthew Jacobs Morgan, and Emily, played with increasing madness by Siobhan Athwal.

Branwell unwittingly underscores the production’s feminist message as the women quietly get on with their artistry and he squanders tragically whatever gifts he has.

Anne (Molly Lynch), is a harder character to define, other than as a support to Charlotte in the face of Emily and Branwell’s non-cooperation.

But all four, like members of a band hell-bent on creativity, pull their weight to roar out the high notes and drive home the killer lines.

The musical texture is happily relieved by Charlotte and Anne’s night at the opera and their tripping steps to the “twitter of witty conversation”.

Anne’s cri de coeur is “there’s no-one to marry for miles”, while Emily’s soul-mate is a dog, performed by the band’s drummer, and she is “a Goth before her time”.

Another contemporary joke is that “nothing important happened in Brussels”.  It’s a reference to Charlotte’s thwarted love affair, but it’s entirely in keeping with the mood of discovering the Brontes’ new relevance to our lives that it makes us think of Brexit.

Not so much accompanying as playing a central role, the band is both loud and disciplined and, for aficianados, there are plenty of classic rock chord sequences that sum up the burning passions of men and women alike.

It’s entirely appropriate that the band’s two guitarists are women.