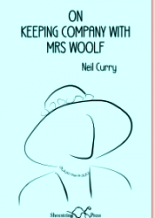 It would make a good party game: choose an historical literary figure and write your conversations. Who might be fun? Emily Dickinson? George Eliot? D.H. Lawrence? Neil Curry wins the round with On Keeping Company With Mrs Woolf, an artful and rather charming succession of conversation pieces, mostly spoken by Virginia herself but with a contribution now and then by the author, who shows due deference without embarrassing his hostess with obsequiousness. Indeed you might think they were old friends—which of course in a way they are.

The notion of an implicit friendship between writer and reader is explored in ‘On Bookshops’, where the speaker hopes to find, on a high shelf, someone

The voice here is, I think, Virginia’s, though it might equally be Curry himself. The clues, and the successes of the poems, are often in the little conversational tropes that Curry throws in: ‘as Leonard / once observed’, or that parenthetical ‘who was it?’ It was Knowledge—in the play Everyman—of course, but that’s not the point. These are essentially little dramatic monologues, in which the speaker’s dismissals and verbal quirks are part of the character-making process.

It’s intriguing to try to figure out how much of the material is based directly on Woolf’s writings and how much is intuitively drawn in by the poet. As befits a personal conversation, there are no notes or apparatus, just talk. Much of the content of ‘On Bookshops’, for instance, could have grown out of a passage in the essay ‘Street Haunting: a London Adventure’ in which Woolf ducks into a bookshop somewhere between Tavistock Square and The Strand.

Woolf is herself the most poetic of prose stylists, so Curry’s job is often to render her affable, approachable, easy to listen to. The knack is to do so and still maintain the personality we know from her essays and diaries. In this, it has to be said, Neil Curry is remarkably successful. Her irony, her energy, her acuity of observation all come through in the monologues:

Just occasionally there’s something that it’s difficult to imagine Woolf actually saying, as at the end of ‘On Railway Journeys’ where she observes a young woman running towards her lover on the platform ‘and I feel / Her nipples stiffen when he kisses her’. The Bloomsbury crowd were frank about sex, in all their notorious combinations, but, to my ear at least, that’s a thought that smacks more of Jackie Collins than Virginia Woolf.

It’s a bit unfair to pick up on such a detail when Curry is clearly deeply versed in Woolf’s world, its characters and the occasions. Bloomsbury enthusiasts—and they are legion—will delight in the references to Leslie Stephen, Julia Duckworth, Stella and Thoby (‘On The Family Album’), Woolf’s early reading in her father’s library (‘On Parents’), and to St Ives, and Talland House, to Kingsway and Kensington Gardens.

Now and then the monologues become dialogues, as in ‘On Sisters’ in which his quizzes her about her relationship with Vanessa:

That mild reproof is a subtle way of reminding us of Woolf’s acute social awareness. Mr Curry has almost overstepped the mark. But Curry isn’t intimidated, and he gives as good as he gets in ‘On Servants’ where he takes Woolf to task for the double standards evident in her treatment of Nellie Boxall. Shades, there, of Mrs Ramsay and the earnest Charles Tansley. Woolf’s class-consciousness comes out again in her recollection of old Mrs Grey of Rodmell: ‘“Every night,” she said, / “I prays to God to take me.”’ and in the casual language of ‘On Lytton Strachey’: ‘…he was everything the plebs / Despised, which is maybe why I loved him.’

In general, Curry is punctilious when it comes to historical accuracy so it must be poetic licence that allows him to move the young Virginia’s embarrassed conversation with Henry James from Sussex to Oxford Street. Or maybe Woolf’s memory is slipping. Time and decay, of course, are hauntingly present, not least in the atmospheric ‘On Leaving Things to Their Own Devices’ with its visual images uncannily reminiscent of the BBC’s excellent, but now alas unavailable, 1983 adaptation of To the Lighthouse.

The end of Woolf’s life is approached tactfully as the collection draws to a close, and, co-incidentally, the connection between the conversationalists is made concrete through the introduction of a third character, Flight Lieutenant Edmund Jeffreys DFC, the first owner of Curry’s copy of The Death of the Moth.

For a moment, in that closing line, the two voices, poignantly, become indistinguishable.