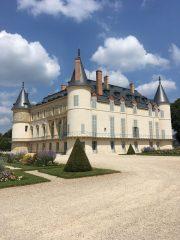 Rambouillet – known for its graceful chateau that is the summer seat of French presidents and the setting for international summits – also has appeal for those seeking a gentler life on the sidelines – or even in the sidings.

The Musee Rambolitrain, a pun on the name of the inhabitants of Rambouillet, known as les Rambolitains, welcomes all ages, from toddlers circling the grounds on the outside track to their grandparents poring over every minute detail of a 400-metre circuit on the museum’s top floor.

In between, we have the history of toy trains told with the finest examples first owned only by the elite and then mass produced following the discovery of plastic, regarded as a wonder material in the years after the war.

The British, we are reminded, were the train pioneers, responsible even in France for trains travelling on the left, echoing a practice going back to the middle ages of driving on the left because horses were mounted from that side.

Napoleon III then became one of the first fathers in the world to give a toy engine to his son in 1859.

But it was the Germans who seized the lead in toy trains when they became the first major manufacturers of electric toy sets that allowed trains to be part of a network, as in real life, rather than a stranded vehicle.

Brands such as Märklin, dominant in the 1930s, concentrated themselves around Nuremberg and produced everything associated with trains down to lamp-posts with lamps filled with alcohol that could be lit, albeit it at some risk, to a trolley groaning with first-class desserts.

Towards the end of World War II, French manufacturer George Huard founded Jouef in 1944, which in the early 1950s abandoned the use of tinplate – difficult to obtain in the austerity years brought about by conflict – in favour of plastic.

Jouef’s first offering in tin-plate was a Trans-Saharan Express – Algiers to Tombouctou – complete with drawings that are no longer politically correct but would fire any child’s imagination.

Britain’s Hornby also had its roots in hardship.  It was founded by the inventor of Meccano who was inspired to drill holes in metal sheets so that he could use the same material to make different toys rather than just one.  They included Meccano trains that led to Hornby trains that have inspired countless layouts in suburban bedrooms and lofts and are on sale to this day.

Few could rival the work of art on the top floor of le Musee Rambolitrain, where trains rattle through a landscape and Paris city-scape, which may not be geographically faithful – the Moulin Rouge is too close to the Gare de l’Est – but every detail is perfectly observed from soot marks on tunnel entrances to accidental footpaths trodden on embankments.

In the station, we peer in past the diners in their finery at the buffet and to the kitchens beyond where the chefs are sweating over their soufflés.

It’s a world of innocence with timeless appeal, far removed from the high politics of the Rambouillet summits.