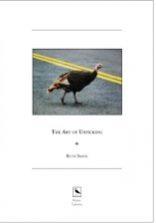 Ruth Smith’s poems may start off down well-trodden paths (family and wartime narratives, a hospital emergency, a care home visit), but they usually end up somewhere new, finding their way to unexpected insights. For example, I particularly enjoyed the surreal irony in ‘Family Reunion’, a reunion that takes place at the bottom of an ocean, where

The collection has a clear sense of progression and a quietly distinctive voice. In the first poem, ‘My Grandmother Taught Me How To Sew,’ Smith introduces the title concept of “unpicking”. Using a playful form not far from that of a sonnet, she contrasts her grandmother’s neat process with her own more experimental sewing, “cut on the bias for hang and flare” and “hoping the shape will come” Immediately, the reader senses a delight in form and a search for new shapes through careful unpicking of what’s already known. Just as she describes in this poem, Ruth Smith’s writing is both sure-footed and risk-taking.

Many of the poems tell stories. Drawing on a strong sense of Englishness, Smith finds ways to “unpick” what that might mean and also to explore other places, other ways of living. There is a sequence of travel tales that adroitly illuminate encounters with other cultures. Through juxtaposition, Smith also throws light on her own culture. I loved the American countrywoman in ‘In Passing’ who lives stoically and humourously with a terminal diagnosis.

In ‘Northern Territory’ she re-imagines England as it might be seen by aboriginal Australians, with its “fields so green they’d hurt their eyes” and “light from a nearby town to block the stars.”

I was impressed by brave and uncompromising poems throughout the collection; Smith is not afraid to con-front dark aspects of human behaviour and history. She does this movingly but without any hint of sentimenttality, for instance in a chilling narrative inspired by the Hungarian poet George Faludy’s account of his time in a labour camp: abuse and cruelty conveyed thorough the murder of a lizard.

In ‘Long Lane Wood,’ the poet tells of the nightmare that was always a possibility in those idyllic days people sometimes look back on so nostalgically. These were days when children were allowed to roam freely (I imagine it to be set in the 50s, my own childhood years). A little girl is traumatised after being groomed and then exploited by “quiet-voiced men”. She is “forced to look at the man’s awful face” as one of them masturbates. Perhaps the poem is an exorcism of sorts; it is also a story that needs to be told.

Throughout the book, I felt that I was in safe but never predictable hands. Smith’s language is beautifully clear and uncluttered, and the poems are arranged so that they follow and develop trains of thought but also at times spring surprises or deepen and darken in tone. For instance, ‘Long Stay’ is a moving portrait of a woman in long-term care, told in restrained tercets. It ends with the image of her conversing, in the absence of a longed-for visitor, with a left-over Christmas balloon. This is followed by a narrative derived from a visit to the house of a family devastated by the First World War. This poem too achieves its effects quietly and powerfully. I loved the way it ends with an action that manages to combine both closure and its opposite, as the mother lays out her lost son’s dressing case open on the bed, before she locks the room.

The next poem, ‘For Sale’ shifts into a much lighter tone, playing on nuanced repetition of the words “light” and “room” in a way reminiscent of a sestina. Others in the collection display a joyful celebration of rhyme, traditional texts and original forms. They sound good when read aloud (I tried with a few, and look forward to an opportunity to hear them read by the poet herself). I especially liked the vengeful ‘Settlement’ and ‘Our Larder’, a foodie take on the Lord’s Prayer. Then there’s the witty ‘Revenge Tragedy’ where a massacre of household pests ends badly and becomes a plea for biodiversity.

The collection ends with a take on Chekov’s ‘Three Sisters’. Beautifully written, it leaves us with the thought of the three women “beating the bounds”, yet still

There’s so much spark in the collection taken as a whole, I almost wanted it to end on a more optimistic note. But these carefully-crafted, humane poems remind me of why I keep reading poetry, why I find it so essential.