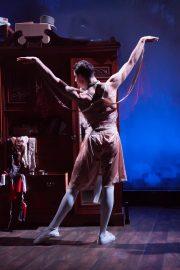 When Iolanthe in 1882 became the fourth consecutive major success for Gilbert and Sullivan, Gladstone, a Conservative-turned-Liberal, was prime minister and women had no vote.

Now we have a woman Conservative prime minister and many sections of society are emancipated.

Still enough of the status quo has survived for Gilbert and Sullivan’s satirical swipes at the lack of brain power of our elected and unelected representatives to seem newly-minted and the Iolanthe fable remains the perfect vehicle to carry them in director Sasha Regan’s unforced, light-as-air, all-male version.

Equally well-judged is Kingsley Hall’s set of a Narnia-like wardrobe that serves as entry and exit point, while Richard Baker’s accompaniment refreshingly is a lone, unamplified piano that keeps up almost effortlessly with the Lord Chancellor’s (Alastair Hill) rhythmic verbal virtuosity.

The piano also makes for a magical, measured opening as it accompanies the cast’s many “chaps” – fittingly the first word of the production – as they blunder through the audience to the stage, lighting the theatre with torches and recalling the original theatre performances at the Savoy, which were the first in the world to be illuminated with electricity, including battery-operated lights in the fairies’ head-dresses.

In another playful touch, one of the chaps rides a bicycle across the stage as the lords and fairies occupy their distinct, misruled and ultimately benignly-compatible worlds.

The all-male cast is surprisingly easy on the ear.  Joe Henry’s Phyllis and Christopher Finn’s Iolanthe stand out for a falsetto that tugs at our heart strings, while Richard Carson’s Strephon is a mellow lover and the deep bass Private Willis (Duncan Sandilands) has what it takes to impress Richard Russell Edwards’ alto Fairy Queen.

As the fairies flit in corsets and underwear, the rabble of lords strides the stage, unabashed and badly-behaved in dressing gowns and house coats.

The entire cast is barely older than the chaps of the all-male public school productions of the past, though the youthfulness of Alastair Hill’s Lord Chancellor is the most striking given our perception of his office.

It could be a dramatic problem as he calls out the apparent absurdity of Strephon’s claim that the seemingly 17 year-old Iolanthe is his mother, but instead it only underlines his human vulnerability in a production that draws out the pathos of all the emotions denied by man-made laws that run counter to nature.