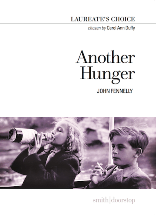 Another Hunger is one of The Poetry Business ‘Laureate’s Choice’ pamphlets for 2018, from one of the four new poets selected each year as ‘ones to watch’; the support of Carol Ann Duffy and the sense of group identity mean they are noticed, individually and collectively. There’s an air of expectation around them but no sense of competition; each is a distinct voice and not necessarily one that is already nationally known. The brief biographical notes on the cover explain that Fennelly is currently rooted in the Manchester poetry scene where, among other things, he has been involved in setting up an open mic and a poetry group. Now, in pamphlet form, he is reaching a wider audience.

Family history, childhood, an ear for Larkin’s rhythms and, above, all, mortality; there are only twenty poems here but they cross-connect and the result is an unexpectedly substantial pamphlet. This also arises from the texture of Fennelly’s taut, closely-worked writing which demands – and repays – attention. The opening lines of ‘Snow’, the sonnet with which the collection ends, shows his precision:

In a succession of (predominantly) monosyllables he moves the initial softness of the snow (the ‘furred rain’) into the harder cold of ice and frost; nothing superfluous in the writing, nothing forced in the concentration, and half-rhymes here that will become unobtrusive full rhyming in subsequent quatrains. I’ve started with this poem to show his control over his images and language even though a more obvious place to start is the ‘narrative’, those glimpses of family history, which open the pamphlet. Snow is shared experience – we all know what’s coming; a family’s history is unique in its detail and often requires some level of teasing out.

Fennelly’s relationship with his father opens the first poem (‘Chaser’), preparing the ground for the following poems;

He’s his mother’s ally, while father separates himself from the family in the sociable fug of the pub or the bookmaker’s; the word ‘frittered’ comes loaded with adult disapproval. His father’s work is “Holes, roads, tube lines / you dug and drank, I swore/ you’d never see me travel.” and the Irish background is slipped in via just two words – “…the bodhrán / of rain …” and “… now I crawl / the craic through East End pubs”. It’s enough, and we think we know the stereotypes and the differences between father and son – until the final lines show the relationship more nuanced

In ‘Another hunger, 1957’ Fennelly shows his father as a young man when “Duck-arse combed. Brilliantined. / Armoured in boots and biker leathers” his father sails from Ireland. The language picks up the transition from Irish ceíli to the lure of big-city rock and roll; the ferry travels over “Tumbling seas like rock-a-billy girl’s/ all petticoat flounce, jive and swell.” The future’s desire is “kick started by songs” and there’s a sympathetic understanding here for the young man who wanted to escape from “the prying priests at every dance”’ Fennelly catches the freshness of the time and the lure of the new world. By way of contrast, ‘My father’s glass eye’ has a quieter tone; it’s a poem for an old man, travelling on buses now and with one eye blinded while working to dig the Jubilee Line, who amuses himself taking out his glass eye to alarm the passengers. Only in death are both eyes finally closed.

Mortality is a constant theme throughout the collection, viewed from different perspectives. in ‘Altar boys – i.m. R.C.’ we see the boys speeding “… away from the requiem altar / in Father Murphy’s Ford Cortina / to the cemetery and its ceremony, the grave.” It’s a lark, the language suggests, this intrusion into the school week, and chance to break away from routine, when “we thought little of impermanence.”

How lightly the young dismiss the dead – but this is a three-section poem, in memory of a friend (one of the altar boys, I imagine) and “the route to the grave” is slower and more reflective in the second and third sections, from the adult perspective, when the deceased has not only a name but a lifetime’s shared memories. A second poem sharing the pamphlet’s title – ‘Another hunger, 30th August 2013’ – is for an unnamed death, but one which makes the poet weep and which brings everyday fragility much closer –

The poem I keep returning to is ‘The present’, four stanzas of five lines, and that rare thing: a poem where the reader’s understanding is just slightly ahead of the narrative. Control of the detail is key, and Fennelly has mastered it, quietly giving just enough:

There is innocence and simplicity in the “cow quiet”, “wee Evie”, “tiptoeing”; we see the scene, just ahead of the realisation that this is a suicide, before the second stanza describes how Uncle Sean “…really could do anything / and walking on air, this was a new game.” Using the language a child would understand, Fennelly takes down to the child’e eye viewpoint, the puzzlement, the strangeness of what adults can do.

There are other and lighter ways to acknowledge mortality; ‘Larkin in Paradise’ is a pastiche in which Fennelly has internalised Larkin’s rhythms and colloquialisms to produce a ‘new’ and very Larkin-like three stanzas. In this poem Heaven has much that is familiar about it .

It’s hard to see where Larkin stops and Fennelly begins, and in the line “Heaven is a lot like Hull” the two blend perfectly.

Carol Ann Duffy has described these poems as ‘compassionate and very much alive’; John Fennelly’s attention to language and connections ensure that this is a memorable collection.