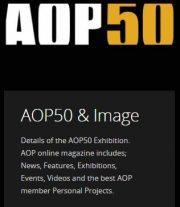 AOP50: Images that Defined the Age – Celebrating 50 Years of the Association of Photographers

Zelda Cheatle, acknowledged as a leading photography expert among European curators and gallerists, has selected some iconic images created by members of the Association of Photographers over the fifty years since its foundation, and for once, the “i” word is right and fitting when applied to the work on show.

The AOP was set up in 1968 to publicise the work and protect the copyright of photographers active in the worlds of fashion and advertising.  Its members include Duffy, John Claridge, Jillian Edelstein and Terence Donovan whose work appears in the exhibition.

The advertising industry enjoyed a kind of golden age during the years covered by the exhibition and some of the images on display encapsulate the power of memorable campaigns with which they were associated.

Take an early example, the Pregnant Man, made by Alan Brooking in 1969 for the Family Planning Association in association with the pro-abortion campaigner Helene Grahame.  The copy asked the male viewer whether he’d “be more careful” if he was the one to get pregnant.  It made an enormous splash.

The idea of a man getting pregnant!  Billboards all over the land asking men to think about using contraception!  Naturally it was the subject of an outcry in the press, which guaranteed the power of its impact at home and abroad, prefiguring the kind of hoo-ha Saatchi campaigns would go on to stir up in the 1980’s.

There are two world-famous portraits in the exhibition made by Jillian Edelstein while she was documenting the work of the Truth and Reconciliation Commission in South Africa between1996-2002.

The first is of Nelson Mandela at a point in his life when he was probably perceived as a kind of secular saint, but who was, in fact, going through the all too human breakup with his wife Winnie.  The second is of Desmond Tutu, captured in characteristic mirthful mode, showing the persona developed in his childhood home where he was called upon to protect his mother from his father’s violence.  I believe they both capture something exceptional behind the usual public face, which accounts for their lasting power.

Campaigns delivered on billboards across the nation, in print and on two TV channels had enormous reach.  We didn’t really have the chance to see anything else.  The rise of digitalised marketing and digital imaging have revolutionised the way in which advertisers get their message across to us.  It’s possible, then, that AOP50 is one of a kind.  You can see it until 1st June.