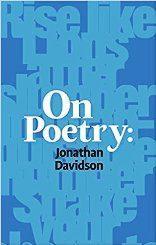 Stuart Henson decides that Jonathan Davidson’s “On Poetry” is a book for both writers and listeners. And academics might enjoy it too.

In his introduction Jonathan Davidson describes On Poetry as ‘essays and pieces of memoir’, and therein lies the rub. This immensely likeable book isn’t really quite sure whether it wants to go in for full-blown critical exegesis or to entertain us with stories and anecdotes. No reason, of course, why it shouldn’t do both, though my feeling is that it’s most satisfying when it leans towards the former and sets out the basis for his admiration of several outstanding poems.

The best thing about Davidson as a critic is that he isn’t distracted in his quest to find the real deal. What interests him is ‘what remains when the fuss has died down—the quiet voices’. Despite his background in arts administration he refuses to be seduced by mere performance whilst still retaining an interest in the performative elements of the poet’s art. The writers he likes are not those who relish ‘strutting upon the stage’ with ‘a talent for self-aggrandising self-deprecation and the appropriate patter to keep those at the back awake’. The stars in Davidson’s firmament are those who simply release their poems to their audience, who ‘place the sounds into the silence’.

The concept of ‘releasing’ a poem is key to Davidson’s argument, though he explains it more by implication than by spelling it out. If I interpret aright, the poem has its own inner energies which, once shaped, allow it to live its own life in the space between poet and auditor, performer and audience, mother and child… Imagine releasing a poem like a homing pigeon—gently opening the door. Or Blake letting loose his Tyger. Perhaps the word also hints at a process of realising, making real: a kind of truth-speaking which just can’t be faked.

Along the way we encounter, or re-encounter, poets as diverse as Ivan Lalic, Roy Fisher, Maura Dooley, Geoffrey Hill, William Shakespeare, Jackie Kay and Ian McMillan. It’s always a pleasure to be returned afresh to a fine piece you know like Holub’s ‘The Door’ or Hughes’s ‘Full Moon and Little Frieda’. More delightful still to be introduced to poems that inexplicably you’ve missed—in my case Peter Didsbury’s ‘The Barn’ and Jo Bell’s wonderful ‘Lifted’, ostensibly a simply descriptive piece about taking a boat through a lock but much more than that in its rich attentiveness. It’s no co-incidence, I think, that Davidson is at his best with these poems, letting them speak, measuring his response: ‘Unlike ‘The Barn’ [‘Lifted’] is not laden with questions. Sometimes we want the certainty of stone and wood and water, of physics and engineering, especially when used as a metaphor for our heart’s (dis)content. It is also witty and moderately self-deprecating, the language ringing clear as water dropping off a windlass…’

The chapters on an international poetry festival in Nicaragua and his ventures with poetry on stage and radio broaden the scope of the book but blur its focus a little. You feel that Jonathan Davidson would be a great bloke to meet and chat with over a pint – a terrific ambassador for ‘the Poetry Commonwealth’ – but you still want more of the close reading, or maybe I should say careful listening. In this respect, he doesn’t disappoint, returning for a final tour-de-force chapter on W.S. Graham’s ‘Johann Joachim Quantz’s Five Lessons’. It would be worth buying On Poetry for this essay alone which provides a clear-eyed (clear- eared?) commentary on all that Graham is about as he uses the 18th Century musician’s observations to point up the joys and demands of the craft so long to lerne.

‘As writers we are being an element that is opposite to silence. We are representatives. I like that. Quantz-Graham is reminding us that although the world is terribly noisy, actually we are simply placing words into silence. Before we speak there is silence. After we finish there is silence. We only have to fill the bits in-between. How hard can that be?’ (Davidson)

How hard indeed. The irony in that last comment is typical of Davidson’s tone. One of the book’s foibles is its obsessional, often amusing, footnoting which becomes after a while something of an ur-text,: ‘Odd, irrelevant, but apt’ (of the similarity between’ Lalic’ and ‘lilac’) ‘This is one of the great missed cultural opportunities of our time’ (on his failure to ask Jasper Carrot to read the part of King Offa in the radio adaptation of Mercian Hymns) ‘He would, actually have been strangely excellent, with or without his moped’.

You get the picture? This is a book, refreshingly, not for the academic, though academics might enjoy it, but for the writers. And, of course the listeners.