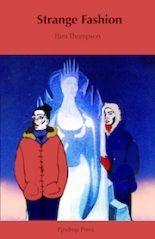 This poetry’s singular blend of ingredients gives rise to unusual insights and perspectives. An initial urban scenario of ambiguously observed Leicester and its surroundings is glimpsed through arresting colours and from unlikely angles. The writing can be quizzical, disturbing, celebratory all at once. Its narrative persona is confiding, even vulnerable but never self-indulgent.

In ‘The Narborough Road Rainbow’ the mixture of colours merges into the poet’s encounter with many ill-matched conversations and images of interiors, and while it’s ‘bolts of sari material let loose/ like see-through stage curtains’ and will be posted by friends on face-book, it’s been strangely contaminated:

‘For Those Who Walk Pavements’ presents snapshots of those we only see superficially in the streets’ shifting masses, as we’ve always somewhere to get to fast. The poem moves rapidly, almost uncompromisingly like many in the book, but its content works in counterpoint, trying to arrest us. It ends with an open-minded and disarming contradiction as we are asked to light a candle

In contrast are the ‘frozen’ images of ‘Newarke Houses Museum’, every exhibit captured at one bleak moment with a recording of women in a corner shop complaining about post-war austerities. You’re numbed by the ingenious historic hark-back in the crafted collection of memorabilia, and the final comments return us to the vitality of problem-ridden daily lives, even a ‘real’ winter. The narrator leaves

Tactically the next poem, ‘ Carnival’, characterises a young Antiguan woman who delights in the freedom of jewelled display, and you see and hear the festive occasions as if they unfold in her memory and imagination.

This city overture prepares us for poems that delve below surfaces into the mind-sets and psyches of those who are apparently close and familiar, even the poet herself, and others more remote or representative. In contrast poems recalling scenes and occasions from travel in the U.S.A, Spain and Scotland work as word-paintings and mood studies, and capture a local atmosphere, but lack the ‘rounded’, thought-provoking qualities achieved where people and places are interwoven. ‘Dear Jack’ is among several exceptions. She tells the Californian poet Jack Spicer how she wished she’d read him before being subjected by ‘a hyperactive guide’ to tour Busch baseball stadium in St Louis. There’s a sense of place as she faces a cultural divide by creating a poem from imagining in ‘baseball’ terms how another poet might react. The tone and improvisatory style are just right:

The illusion is nicely ‘rooted’ as she imagines him watching ‘guys warming up’ and scribbling a poem that might make it into the local Sporting News.

Poems about ageing relatives superimpose on the present a tougher, leaner past life and environment. (Belfast docks, relentless nursing, department store drudgery.) Perplexing changes and the divergence of generations are dramatized frankly and movingly. These characters emerge as themselves and, unlike those museum models, their past is as vivid as if it were yesterday. ‘Home: Redux’ is a Google Earth tour of long-abandoned places, but all the more suggestive by giving the changes and memories as observed facts and leaving us to imagine the emotions of the person whose house

This delicate oscillation between tangible realities and our capacity for imagining other dimensions deepens the impact of poems that envisage mental stress and disturbance. In ‘Breakdown’ we feel the terrible confusion of familiar objects and people displaced and wrongly assorted, the reversal of expected behaviour from those closest to us. This is bundled together uncompromisingly like the experience, but you don’t feel excluded. Introduced as the close of a dream it’s really a continuous nightmare.

The sequence ‘In Glass Houses’ reveals in lurid yet sometimes disarmingly mundane terms the effects of paranoia with its unfathomable resentments and suspicion. Quoting feels like snagging frail webs and connections: it works so well as a whole, entering an impenetrable self-fuelling topsy-turvy version of everyday living, a glazed-over fragility.

There are also several darkly humorous experiments with breaking into other dimensions. In poems like ‘The Moon Accepts an Invitation to Appear as Zeitgeist’ and ‘The Black Hole and the Unfaithful Wife’, ‘Emily Bronte and Emily Dickinson Visit an Antique Shop in Church Stretton’, you need to let go to find a fascinating ‘internal’ logic and sophisticated layering of sense. The fantastic is always geared to exposing ‘truths’ and parallels overlooked by living on the surfaces.

I’ve always felt this poet’s work has something in common with graphic art that attempts to expand our boundaries of awareness. Appropriately ‘An Umbrella for Georgia O’Keefe’ imagines the tasks and observations of someone who assisted this relentless, obsessive painter; and ‘Strange Fashion, Canary Wharf’ reveals in four aptly sharp, no-nonsense poems the process of sky-scraper-face sculpting and painting. The preparation with industrial sheeting is a picture in its own right as

The personal conflicts and practicalities of the designers are a major focus: art is mainly hard work, and, as the ambiguous finale suggests, you are never quite sure if the result fulfils the concept, or how it will be received:

This collection kept me on my toes with its shifting styles, stripping aside assumptions for ways in to a range of experiences and reflections. It’s the work of a poet fully attuned to the limits and potential of the written word.