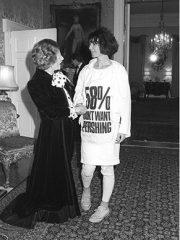 T-Shirt: Cult-Culture-Subversion
Fashion and Textile Museum, London,
Until May 6.

Of all the things we wear, the T-shirt has the ability to be both humble and exclusive.

To underline the point, the Fashion and Textile Museum’s shop accompanies its exhibition on the T-shirt from the fifth-century, when it was a variant of the tunic, to now, with designer examples on sale for around 100 pounds.

After a display that serves to convince us of just how cool T-shirts can be, we might even buy one, but only if it fits with the message we want to convey because another great thing about T-shirts is that they allow us to wear our hearts on our chests.

While a muscular Marlon Brando made a plain white T-shirt his own, T-shirts are most likely to become a statement when they scream a political message.

One of the arch-proponents of allowing her clothes to do the talking is Katharine Hamnett who greeted Margaret Thatcher wearing the slogan: 58% DON’T WANT PERSHING, in protest at the prime minister’s decision to allow U.S. missiles to be stationed in Britain.

Equally famous are Vivienne Westwood’s contributions, as collected over three decades by one Lee Price, who became hooked after wandering into Westwood’s shop World’s End in King’s Road when he was about 12.  He later worked for her and says wearing her T-shirts is the ultimate conversation starter.

But if words are eloquent, pictures can also speak volumes, aided by digital technology that transforms the way images are transferred on to T-shirts.

One of my favourites was the pug-face T-shirt.  David Bowie’s Aladdin Sane face equally seems destined to become emblazoned on backs and fronts the world over.

Whether witty, ironic or political, in 21st-century Britain, a T-shirt has become a self-conscious style choice, though the exhibition also takes us back to more innocent, straightforward times when the original wearers of the T-shirts sporting the characters of The Wizard of Oz were doing no more than wearing the very first promotional T-shirts and expressing their enthusiasm for a favourite film.

The exhibition concludes (unless you count the shop) with a section on last words.

They lay down the challenge of trying to come up with even more compelling ultimate statements, but it is hard to cap “We’re all Doomed”.